Out of the past: the Grand Canyon Hotel revitalized 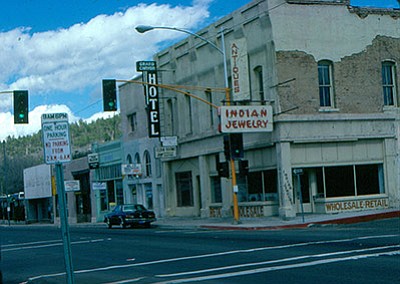 Businesses struggled on Route 66 when traffic was rerouted away from town in 1984 because of the newly built I-40. The 125 year-old Historic Grand Canyon Hotel was witness to the changes in Williams.Ownership of the hotel passed through many hands and is now owned by Amy and Oscar Fredrickson who purchased and remodeled the property in 2004. It reopened for business in 2005. photo/Williams Library Historical Photo Archive

The Historic Grand Canyon Hotel on the corner of Second Street and Bill Williams Avenue was built in 1891 by C.E. Boyce, a pioneer merchant in Williams.

According to an interview with F.E. Wells in a 1938 edition of the Williams News, Boyce came in with the railroad, and for a time ran a meat market that he enlarged into a general merchandise store. Boyce set up his first store in a tent, while he put up a galvanized building at the corner of Second Street and Railroad Avenue.

By the mid-1880s Boyce had considerable real estate in Williams and was recognized as a very successful merchant. He homesteaded a ranch in Spring Valley, northeast of Williams. During his time in Williams he was appointed postmaster, served on the town council, was appointed to the Coconino County Board of Supervisors, and served as a trustee for the school district. The 1929 News stated, "No other citizen of Williams can claim the distinction of having built as extensively as Boyce, and few, if any, show nearly so good a record of civic pride and public spiritedness."

Boyce opened the hotel as a resting place prior to journey to the Grand Canyon by stagecoach and then the rail spur built in 1901. It was the first substantial hotel in Williams and in 1893 a second story veranda was added to the building. At the time the property was the only hotel in northern Arizona and now holds the title of the oldest hotel in Arizona.

The original registers from 1904 are on display in the lobby. General "Black Jack" Pershing (a captain at the time), the King of Siam, The Vanderbilt's and John Muir (founder of the Sierra Club) were some of the famous guest captured in the hotel registers.

The hotel continued in the 1940s with a $3.50 rooms sign hanging outside the front door. The hotel changed hands several times and eventually closed in the 1970s becuase of neglect and changes within the city. The railroad closed during that time and shortly after that the Route 66 bypass opened and Interstate 40 drew people away from downtown Williams.

The building sat empty (other than being a home to pigeons) for over 30 years. In 2004, Amy and Oscar Frederickson purchased the property and spent a year restoring it. They replaced the sewer, converted the 80 amp electrical service to a 600 amp service, and installed zoned hot water heaters with additional water pressure for showering.

The hotel now has 24 rooms. Many of the rooms were kept in their original design. Sixteen rooms have private bathrooms and eight rooms share bathroom facilities down the hall.