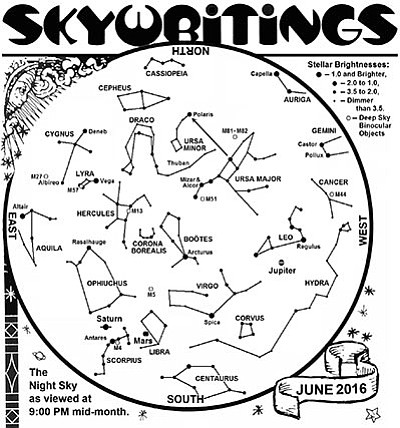 Have you seen that very bright orangey thing up in the sky at night? That is the planet Mars which, on May 22, just passed its biennial closest approach to Earth, known as opposition. Mars currently forms a triangle in the sky with the planet Saturn and the red star Antares, the brightest star in the constellation Scorpius, and will continue to do so into August. Though the name Antares means "the rival of Mars," Ares being the Greek name for Mars, at opposition it pales in comparison. For the next month Mars will continue to shine about five times more brilliantly than Saturn and Antares.

For most of the time, Mars is a somewhat disappointing planetary object to observe through a telescope. It appears as a rather featureless small orangey-reddish disc. However, during a few months every two years, when both Earth and Mars are on the same side of the Sun, the apparent size of the planet is greatly increased. Since both Earth and Mars have elliptical orbits, there are times when Mars is at its closest to the Sun, while Earth is at its farthest. These oppositions occur about every 16 years. Though not at their record closest separation, the planets were about 47 million miles apart on May 22.

Over the years, as each Mars opposition approaches, there has been a statement spreading via the internet, as well as occasionally repeated throughout the general media, that during these close planetary approaches, "Mars will look as big as the moon." This, although often described as a hoax, is because of the editing of part an original statement made in 2003 by a NASA scientist who said that "Mars, when viewed in a telescope at a magnification of 100x, will look as big as the moon to the unaided eye." Were the shortened statement true, we would be in big trouble. Given the combined gravitational pulls of Earth, Mars, and our moon during such a close approach, tidal effects, and seismic activity would result in world-wide devastation.

Though Mars is much smaller than Earth, its surface area is about the same as Earth's land surface area. Mars also has some of the most highly varied and interesting terrain of any of the terrestrial planets. It has the largest mountain in the solar system, Olympus Mons, which stands 78,000 feet above the Martian plains, and Valles Marineris, a 2,400 mile canyon that would stretch from Flagstaff to the east coast, were it on Earth.

Mars has been known since prehistory and has been extensively studied with ground-based observatories in modern times. However, even very large telescopes find Mars a difficult target; it's just too small. But, it is still a favorite of science fiction writers as the most favorable place in the solar system (other than Earth!) for human habitation. But the famous "canals" "seen" by Lowell and others were, unfortunately, just as imaginary as the Martians from H.G. Wells' novel "War of the Worlds."

Since Galileo first directed his telescopes toward the skies, humans have either believed, or at least questioned, whether there was life on other planets with the usual non-scientific response "Why else would God have created them if not to populate them." And Mars was the most popular object for scrutiny because of its seasonal surface changes and the closeness to Earth where some indication of intelligent life might be discerned.

The idea that Mars was populated by intelligent Martians exploded in the late 19th century. Schiaparelli's observations of "canali," which were misinterpreted as meaning canals, rather than "channels," and Percival Lowell's books on the subject put forward the idea of a planet that was a dry, cool, and dying world with ancient civilizations constructing irrigation works. Nikola Tesla, while investigating repetitive radio noise, surmised that it might be radio communications possibly coming from Mars. Edward Charles Pickering, director of the Harvard College Observatory, even proposed creating a set of mirrors in Texas, intended to signal the Martians.

Seasonal changes consisting of the diminishing polar caps and dark areas formed during Martian summer in combination with the canals lead to speculation about life on Mars. Though some observers claimed they saw the canals, other experienced observers, like Flammarion, were unable to do so. Recently in several scientific journals, it has been hypothesized that because of the stopping down of the telescopes being used to observe Mars, a common technique used to reduce Earth atmospheric effects when observing, created such a small exit pupil at the eyepiece, it may have become a giant ophthalmoscope which gave Lowell (who reduced his 24 inch diameter lens to as small as 3 inches) and others who saw the "canals" an image of the shadows of blood vessels cast on the retinas of their own eyes.