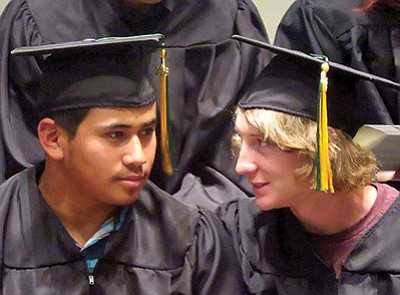 Juan Ayala, left, and Conner Maketa take part in Yavapai College graduation ceremonies on May 7 when they received their Electric Utility Technology certificates after completing the two-year program. Maketa graduates from Ash Fork High School this year and Ayala will be a senior next year. Submitted photo

Maketa is a graduating high school senior and Ayala just finished his junior year. For the moment, neither student is choosing to work in the field.

Ayala turns 18 in December and will study for his commercial driver's license. In the meantime, he will attend Ash Fork High School for his senior year, and continue to participate in athletics - including baseball (he played third base this year when the team reached state quarterfinals), basketball and soccer. Upon graduation, he will look for work as an apprentice lineman and start racking up the 8,000 hours needed to reach journeyman status.

This past fall, transportation to the Career and Technical Education Center near Prescott's airport - where the certification program takes place - fell through for both boys when the classes in the second year of the two-year program changed from afternoon to morning. The school bus ran from Ash Fork to Prescott only for afternoon classes.

Maketa, however, has his sights set on opening a coffee shop in Ash Fork - Conner's Crazy Coffee. He has all the equipment and the building, as his parents had plans to open a shop a few years ago and already purchased the machines. He doesn't want to move to Phoenix for lineman work.

"I'm not a city boy. Jobs are pretty slim and I didn't want to move, not for now anyway," Maketa said.

He would definitely recommend the lineman program for others. Climbing the 80-foot poles, for instance, was "a lot of fun."

"I was afraid of heights; that's why I took the class. I didn't want to be afraid any more. Now I'm not," Maketa said. "I'm kind of an adrenaline junkie."

Rosemary Hume, educational guardian of Ayala, said this past school year was grueling at times, particularly this past semester. In addition to the certification courses, Ayala earned 12 credit hours for a total of 42 college credits.

"Finishing this program as a junior is exceptional in my opinion - especially since Conner and he were the only two JTED students to stick with the lineman program this year. I am so proud of this young man," Hume said.

In addition to the college classes, Ayala worked during the school year and will continue with his job at his uncle's service station this summer. On his day off, he digs postholes for a rancher.

Would he recommend the lineman program to other students? "It's a good program. You learn a lot, and it's a good experience."