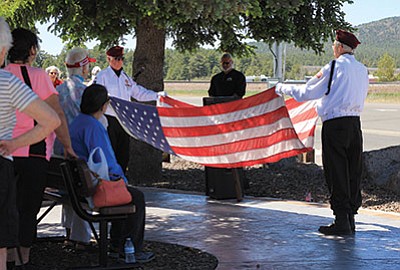 Residents and visitors joined VFW Post 12128 May 28 at Memorial Park in Williams to honor those who died while serving in the United States armed forces. Keynote speakers included VFW Post 12128 Auxiliary member Carol McElwain and VFW Auxiliary Chaplain Joan LaPier who spoke to the crowd about the sacrifices made by service men and women. The ceremony included the playing of Taps and ended with a 21-gun salute. The American Legion Cordova Post No. 13 held a Memorial Day ceremony at the Williams Cemetery May 29.