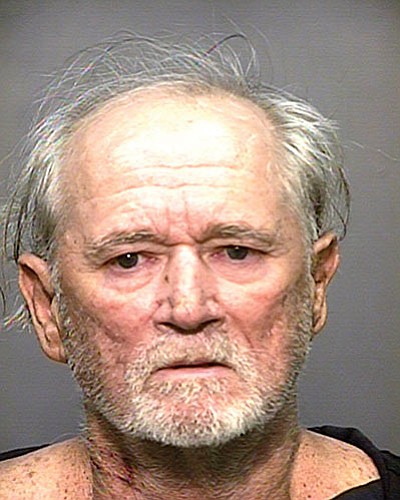 Larry McGowan, previously from Louisiana, was booked on two counts of attempted homicide May 31. Photo/courtesy of Coconino County Sheriff’s Office

VALLE, Ariz - On May 31, 67-year-old Larry McGowan was booked into the Coconino County Detention Facility on two counts of attempted homicide against Valle resident Teri McGowan and her neighbor.

On May 27 around 5:15 p.m., the Coconino County Sheriff's Office (CCSO) responded to a domestic assault in progress at a residence in Valle. The suspect left the residence on foot prior to the deputy's arrival.

According to a Sheriff's Office press release, Teri McGowan, who is not related to Larry McGowan, sustained multiple injuries after being hit with a baseball bat and was airlifted to Flagstaff Medical Center (FMC). Teri McGowan reported that in defense she fired two shots at the suspect. It was later determined that neither shot hit the suspect. Teri McGowan's neighbor also sustained injuries during an attempt to report the crime.

Deputies and a K9 Unit searched for the suspect for approximately two hours on the evening of the incident. Larry McGowan was tracked to a location almost half a mile from the residence. When located, he had several stab wounds and was airlifted to FMC for his injuries. CCSO spokesperson Erika Wiltenmuth said Larry McGowen was not booked immediately into the county jail because of the stab wounds.

"His stab wounds were such that they were able to treat those and we were able to book him (May 31)," she said.

Wiltenmuth said the cause of the stab wounds are under investigation, however, based on current information, it is not believed to have happened at the scene.

"We do not have answers right now as to how he received those stab wounds," she said. "It's not consistent with any self-defense actions that the people at the scene took."

Wiltenmuth said it has not been determined whether or not drugs or alcohol were a factor in the case and said there is no threat to neighboring homes.

"This was a domestic situation. So there is no indication of any threats to any other residences," she said. "It was between two people at a residence. As the case develops there will be updates and whether or not there will be a court case."

Teri McGowan said she was very grateful for the compassion and professionalism of all those who responded to the call.

The case is currently under investigation.