Miller steps in as city manager 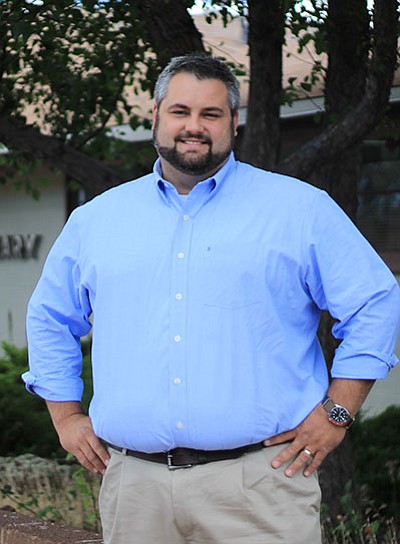 Skylor Miller stepped in as the new Williams City Manager July 14 after a two-year stint as city manager in Quartzite, Arizona. Wendy Howell/WGCN

WILLIAMS, Ariz. - Skylor Miller says it was the smell of pine trees that sold him on Williams.

"The first time I came up here and sucked in that smell, I said 'OK, I'm home,'" Miller said.

Miller began work as the new city manager for Williams July 14 after a two-year stint as the city manager of Quartzite. In just the first few days of the job, Miller was spotted walking through town, joining in various organizational meetings and meeting numerous business owners and residents.

"I'm already doing the rounds," Miller said. "I hit the ground running. I promise I'm trying to absorb as much as I can."

Miller steps into the position following a five month vacancy after the departure of former city manager Brandon Buchanan. Buchanan left for a city manager position in Woodinville, Washington after a five-year stint in Williams.

Miller was born and raised in Butler County, Ohio, just north of Cincinnati. He is the third generation in his family to be raised within the county. He went to Miami University after graduating from Fairfield High School and earned a bachelor's degree in Urban and Regional Planning.

Initially, with dreams of becoming a naval officer, he went to the university as a Navy ROTC but a severe hip injury in his freshman year dashed those plans and he turned to geography and planning.

"I just always wanted to serve whether in a community or the military," Miller said. "I was happy with that."

Following graduation, Miller immediately went to work for Butler County Department of Development as a planner.

After several years as a planner, Miller was hired as the assistant township administrator for Fairfield Township.

While working for Fairfield Township, Miller decided to return to school and earned a master's degree in Public Administration from the University of Dayton.

"I decided I love what I do but I wanted to do more of it," he said about his return to school.

After five or six years at Fairfield Township, Miller and his wife began thinking about the next chapter in their lives. He said they both loved growing up with extended family nearby but were ready to head to a new adventure.

Miller and his family were active in the Quartzite community. Miller's wife, Danielle, worked for the town's recreation program and was on the school board. They have two children, Grace, who is 10 years old, and William, who is 8.

Miller said Quartzite is similar in some ways to Williams. The population is around 3,700 and the economy is based on tourism. However, Quartzite is busy in the winter months while Williams has most of its activity in the summer.

Miller said he and his family are excited to be in Williams. He said Williams and the Grand Canyon were one the first places they visited when they moved to Arizona.

"It had that small town appeal that I loved," Miller said.

When the position came open in Williams, Miller said he and his family were interested in applying so they could return to the pine trees and have snow again.

Since his arrival, Miller has been making the rounds through town meeting residents and business owners. He said he has been quickly learning about the concerns and issues facing Williams.

He said one of the main issues he thinks the city is facing is infrastructure upgrades.

Miller said he is encouraged with the work the city staff has already done toward these issues.

"You have to look at creative ways to be efficient, and Williams is already doing that," Miller said.

Miller said the re-use project at the waste water treatment plant is significantly reducing the load at the water plant. He said the city staff has been working on grants for road improvements and the city has several new water tanks in place.

"We're also working with APS on infrastructure and improvements on electric," he said.

Miller said the challenging water issue in Williams is not unique. He said Quartzite had water issues the town was also dealing with.

"We had wells in abundance but the challenge was getting it to the homes," he said.

Miller said prior to his departure from Quartzite he was working with the city to build redundancy in their system, similar to what the city of Williams has been trying to do the past few years.

"Quartzite essentially uses one well to keep the town going," Miller said. It puts out 800-900 gallons per minute, but as far as their reserve capacity, if that well goes down they only have a three-day water supply. That was it."

Miller said his immediate concern is not Williams' water capacity and supply. He said he feels good about the diversification the staff has worked on and the reserve capacity of the city.

Miller believes in a hands-on management style. He thinks as an ambassador of the community it is important to get out in town and be accessible to the public.

As far as working with city staff, he believes it is necessary to give them room to do the jobs they were hired to do.

"As far as I'm concerned they are the experts in their fields and I'm there to support them," he said. "If they need me to get involved more I'm there, but my job is to be cheerleader and supporter."

Miller believes that he and the city council are a team. He said the council is responsible for setting government policy and it is his job to make that policy a reality.

"City hall is an organization that has to be responsive to the needs of the public," he said. "So those guys are my seven eyes and ears out there in the public. They need to get back with me so I know what troubles lie ahead and how can we best solve those."

Although he is new to the city, Miller said he can see many positives in Williams. He said Williams has a charm that is very unique.

"By day we embrace our western heritage, our true grit western heritage," he said. "And then dusk hits and you see all the neon come on and takes you back to 1950s Route 66. You can't get that, you don't bottle that and package it. That's unique and homegrown."

Miller said another strength or virtue the town has is just the fact that it is a small community.

"I'm seeing how everybody lifts each other up," Miller said. "Seeing people support the police here and how people rally around the school. That's small town strength, that's awesome."

Miller said he looks forward to being in Williams a long time. He said his interest in city management is different from many managers today.

"I have no plan for politics. As far as I'm concerned the position is not the thing that changes and you hop to it. It's about being part of a community and building it," Miller said. "And down the road seeing the fruits of your labors."

Miller said he knows many city managers are on a career track, but said he isn't interested in moving in that direction.

"I could be very happy being city manager of Williams until I retire," Miller said. "I know that's not the norm anymore...if Williams wants me that long, I'll be here."