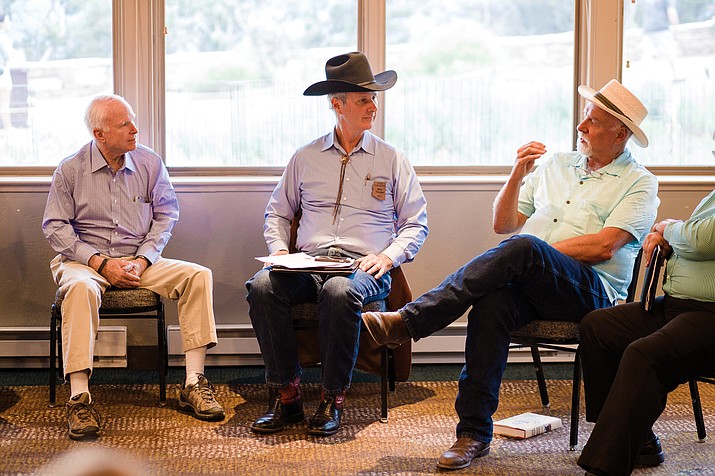 McCain vowed to fight the designation of the monument should it occur through the use of the Antiquities Act before President Barack Obama leaves office. McCain said the designation is not only a land grab but also a water grab and said he is concerned Obama will ignore Congress and the Constitution by designating the monument.

"Monument designation could interrupt forest thinning on the Kaibab (National Forest), halt Tusayan's proposed expansion, interrupt generations of grazing and hunting, adds a layer of federal planning and management that will hurt not help the Canyon, there's a legal concern that monument designation of this size could create a federal water right where there currently is none. This is not just a land grab it is water grab," McCain said. "One of the challenges that we face - about a year ago the president of the U.S. said, 'I have a pen and I have a phone.' He's basically saying he's going to ignore Congress, the Constitution. I'm worried that as this administration winds down that it will be crucial to designation of monument status. I want to promise you that I am as committed as anybody in this room to observing the duty of our state but this part of the state should be used for multiple use, it should be used for all the reasons why it has since people first came here to Arizona."

Stakeholders attending the meeting included Tusayan council members and Tusayan Mayor John Rueter, sportsmen, ranchers, the Arizona Game and Fish and other conservation and hunting groups opposed to the designation.

"There are 28 groups in the state of Arizona - conservation groups, who have voted and sent a letter to Senator McCain specifying that we are against monument designation," said John Koleszar, representing the Arizona Deer Association.

Tusayan Town Manager Eric Duthie asked McCain about the status of the recent Gosar/Stewart Bill, which passed the House Appropriations Committee June 15. The bill was an attempt to block the creation of new national monuments, including the Grand Canyon Watershed and Bears Ears in Utah and would prohibit the president from designating new national monuments under the Antiquities Act.

McCain said the bill has a slim chance of making it to the Senate.

"I appreciate what Congressman Gosar did, but frankly, my friends, we need a new president," McCain said. "I'm not here as a Republican trying to be partisan, but this is the most liberal administration we've ever seen as far as environmental western lands ... we could probably get (the bill) passed as an amendment if the bill was on the floor of the Senate but they are blocking it from getting to the floor of the Senate."

The amendment is included in the Interior Appropriations Bill, which the house expects to vote on sometime this summer.

Additionally, Arizona Rep. Bob Thorpe (R), also in attendance, said his bill, HB2585, was signed by Arizona Gov. Doug Ducey earlier this year and will help ensure the federal government doesn't take more land than is legally allowed when creating national monuments in Arizona. The bill requires the State Land Department to maintain a catalog of each existing or newly created national monument in the state. According to Thorpe, the language in the Antiquities Act states that land designated by the federal government under the Antiquities Act has to be limited.

Thorpe said he believes the Antiquities Act needs to be repealed and said under the U.S. Constitution, the federal government has to get permission from the state legislation if it wants to do something within a state and the government has to compensate the state for the land.

As the only town that would be within the boundaries of the national monument, Rueter said he is concerned about how that could potentially affect the town. It could also limit development in the area and for the town.

"As far as the monument, we don't think its being totally or honestly projected as to what it's going to do," Rueter said. "We are the town that is most affected, that is within it."

McCain said he supported the town's plan for housing and possible future development in the area and said he would not quit on pushing and addressing those issues.

"I think one thing we would agree about is there's not enough housing," McCain said. "Particularly when we see the tourism here increase every year at the Grand Canyon, where there's a need for more employees, where there's a need for more housing. The Forest Service said it was not in the public interest. Isn't it in the public interest to be able to provide people who come here with service and amenities and things that are supplied by the industry here? Again, it's going to depend on another administration, probably. We're going to try it again."

In March, the Forest Service returned a road easement application from the town of Tusayan to properties east and northwest of Tusayan. The town plans to develop these properties for housing. Approval of the easements would also have allowed Stilo Development Group to move forward with plans to build a major commercial development on the same properties, which could include hotels, restaurants, retail, entertainment and educational attractions.

McCain said he would do everything he could to fight the designation and possible repercussions it could have on the area.

"That's why I'm here. It keeps the issue up on my priority list and so with that and if your organization(s) are as active as they are - it has been incredibly helpful. Think what it would be like if you had been silent," McCain said. "You have to believe that if a majority of people want a certain policy implemented that if you believe in democracy that over time that's going to have to happen. It's worth the fight."

Jim Parks president of the Coconino County Farm Bureau and Cattle Growers Association and a candidate running for a seat on the Coconino County Board of Supervisors, asked McCain if the designation could be rescinded should it happen. McCain said that would depend on who the president is after the upcoming election and said it would take a two-third vote of the Senate to override a veto.