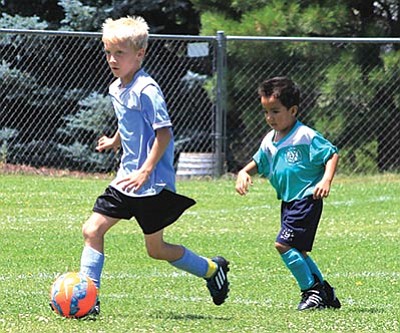 Mikey Cavaletto dribbles the ball around a Flagstaff opponent in a July 23 game in Williams. Wendy Howell/WGCN

After a short hiatus, American Youth Soccer Organization (AYSO) is back in Williams.

Daly said there are six teams in Williams this year. The children range from 5 years old to 12. She said several older children signed up but there weren't enough to make a team.

"Its a lot more than we had last year," Daly said. "I think we only had two or three teams."

Daly said the program has been strong in the past but the program went without a local coordinator for a few years and the number of kids participating dropped. Daly said she stepped up to ensure the program stays going in Williams.

The Williams teams are a part of the Flagstaff AYSO program which also includes the Grand Canyon.

The teams have had four games in Williams and one in Flagstaff so far this season.

"I think the rest are going to be in Flagstaff," she said. "I believe the end of the season is at the beginning of September."

Daly said she has worked hard to try to get more games in Williams so families are not having to travel to Flagstaff every weekend.

"That was the biggest problem in the past," she said. "Parents didn't want to travel to Flagstaff every Satruday for games."

Daly said a crew of voluntters has made the program successful this year in Williams.

"The coaches we have are wonderful and continue to help to keep the program running," she said.

Daly said she hopes to get the word out more next year about the program.

"We've had several kids stop at the practices and ask how to sign-up," she said.

Daly said the Williams Unified School District has been instrumental in giving the children a place to practice.

"Coach Echeverria from the school has been tremendous," Daly said. "He has helped us so we could have the (high school) fields for soccer even with the ongoing football camp."

"It was little rough at first finding coaches, but then a lot of people stepped up," she said. "The more that we can get to volunteer the better the program."