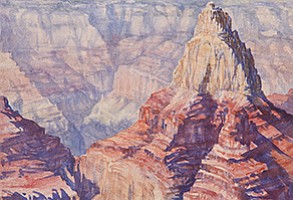 GRAND CANYON, Ariz. - He sits on the ground, there is no easel, chair or umbrella, only a tarp and a little paint box, almost 50 years old. His pigments and brushes lie next to him, protected by the paint box as wind, dirt and bugs share the space where plein air artist Robert Dalegowski creates watercolor paintings.

Dalegowski paints on watercolor paper. He uses a 9x12 block with 10 sheets of paper, sealed with latex around the edges to hold them solid and prevent wrinkling.

"The availability of artistic expression, whatever it may be, as it relates to the Canyon gives the visitors another way to see it," Dalegowski said. "You can look at it on a movie, in a photograph - when you look at art you are getting a third person discolation of the scene. The ability to see the spectacle through the eyes of an artist is an engaging thing that is important to the park service."

Dalegowski is a native of Arizona, raised in Doney Park on the east side of Flagstaff. He has spent most of his life exploring and painting the Canyon. Because of the intimacy and accessibility he's had with the Canyon, Dalegowski has a unique approach when he paints Canyon scenes.

"My technique is different than a lot of watercolor painters because the environment in the Southwest is very dry and watercolor, by its nature, depends on water," Dalegowski said. "In the Southwest (pigment) dries so quick that it's very difficult to keep everything wet, especially the way I do it without an easel or anything, so my technique has a lot of hard edges in it. You can only keep a small space wet before it dries and you have to move to something else."

Many years of experimentation with watercolor and plein air painting helped Dalegowski achieve a style of controlled and colorfully expressive brushwork to develop a final vibrant image. Combined with the inspiration and solitude of the wilderness, this technique captures the essence and light of moment and place. Dalegowski said nothing he paints is an exact representation of what is seen, rather an edited vision to express the glow of light and complexity of mood. Landscape, particularly the Grand Canyon, is a favorite subject. Through his art, he shares the essence, beauty and geology of the Canyon with others.

In contrast to Dalegowski's style, in most traditional watercolor art, water is an active and complex partner in the painting process, changing both the absorbency and shape of the paper when it is wet and the outlines and appearance of the paint as it dries. The difficulty in watercolor painting is learning how to anticipate and leverage the behavior of water. Painters normally wet their paper and keep it wet, putting paint on and slowly letting it flow together to create a poetic, pastel result.

Rather than trying to fight the arid Southwest conditions, which tend to rapidly absorb the water, Dalegowski exploits the conditions and uses the environment to create harder edges in his paintings.

As a plein air painter, Dalegowski enjoys working in difficult areas - like the interior of the Canyon.

Every year Dalegowski goes into the Canyon to paint in Grand Canyon's annual Celebration of Art event. The last two years he painted at Indian Garden along the Bright Angel Trail. He hopes to return to Indian Garden again this fall.

"For the Celebration of Art I usually go into the backcountry - Indian Garden or Phantom Ranch," he said. "It's an easy hike, it's a nice place and there's a lot of people that I can interact with. I usually sell something too."

When Dalegowski chooses what he wants to paint he evaluates the composition on a very basic level.

"I'll look at something and see a design or a pattern - mostly lights and shadows, sometimes the physical formation in it inspires me to draw and then paint," he said. "In my opinion the key to the situation is to be able to make a very detailed drawing so when I paint I don't get too confused on the situation."

Dalgowski was taught to approach art through sketching and by coloring initial pieces before returning to the studio to create oil paintings. He said he became hooked on the immediacy of doing the preliminary paintings.

"It's what I love to do - that quick impression of whatever it is. Then I lose interest in going back to the studio and doing a very complex painting. I would just as soon leave that aside," he said. "I just like to focus on the initial quick aspect of trying to capture the essence of a place. I suppose on one hand that's selfish, but that's my approach."

The oldest of five brothers, Dalegowski roamed the forests and canyons of Northern Arizona as a child, developing a deep love and respect for the solitude of wilderness which surrounded his rural home in Doney Park. Growing up without electricity, his father instructed the boys in the practice of drawing as entertainment, using fireplace charcoal on old newspapers. He drew throughout his childhood and eventually the activity became synonymous with a sense of family and relaxation. During the Vietnam War, Dalegowski drew throughout his deployments and said drawing was his lever on sanity.

"It's been my anchor throughout my life. I've done lots of things, but I've always drawn and painted for my own pleasure," he said.

Dalegowski is a member of The Artists Gallery, a co-op in historic downtown Flagstaff. Dalegowski is one of 27 artists invited from across the U.S. who will participate in the Grand Canyon Celebration of Art, Plein Air on the Rim in September. His art is currently displayed at historic Kolb Studio in Grand Canyon Village and at The Artist's Gallery, 17 N. San Francisco St. Flagstaff, Arizona.