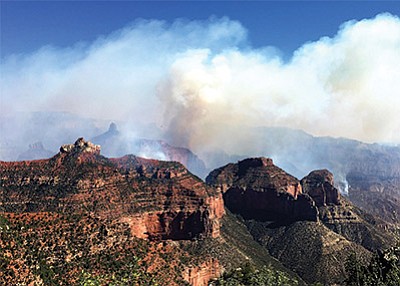 Mop up continues for the Fuller Fire on the North Rim of Grand Canyon after high humidity and rain helped firefighting efforts July 21. Photo/USFS,

The fire has currently burned 14,348 acres and is seven percent contained. There are 540 personnel working the fire.

Mop up operations have successfully cooled hots spots and removed hazard trees along the Point Imperial and Cape Royal Roads. Fire has continued to consume heavy dead and down timber inside control lines, effectively cleaning the forest floor and improving overall forest health.

"Much of the Fuller Fire is smoldering in rugged and remote country to the north and west," said Incident Commander, Alan Sinclair. "These areas may continue to burn naturally for some time as monsoonal rains ebb and flow across the landscape."

A 40 percent chance of rain will aid firefighters in continued mop-up operations along Cape Royal and Point Imperials Roads with in the Park. Crews are also working to rehabilitate fire lines when it is safe to do so. The fire will continue to smolder internally as the area dries out with arriving hotter and drier weather this weekend.

South winds will push any smoke produced to the north over the House Rock Valley area. More information on smoke and your health is available at Wildland Fire..