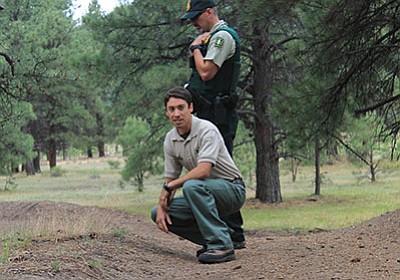 These are some of the unfortunate results of off-road vehicle use on the Kaibab National Forest, according to Jerry Parker, law enforcement officer with the Forest Service.

"I don't think most people are being irresponsible, I think they just don't know," Parker said regarding the rules and regulations of off-road vehicle use on the Kaibab.

Motorized vehicle use rules in the forest went through drastic revision when the Kaibab Travel Management Plan was implemented on the Williams and Tusayan Ranger Districts in 2010. The plan was in response to a federal rule that required all National Forests and grasslands to designate a system of roads, trails and areas for motorized use, and to prohibit all motor vehicle use off the designated system.

Parker said many forest users he encounters are aware of the rule changes, but he said further education is still necessary to get the message out.

"If you come from Phoenix, like I did, doing this in the desert was ok growing up," he said. "In the 1980s and 1990s it was what we did. Ecology and conservation wasn't as big of a deal then as it is now."

"Before the Travel Management Rule our regulation stated that off road travel was ok as long as it didn't create resource damage," Parker said.

Under the new rules, motorized traffic is restricted to within 30 feet of designated roads, except in camping corridors, which allow vehicles to travel as far as 300 feet from the side of the road. Vehicles can also be taken off-road to get firewood, or a legally harvested bison or elk.

The Kaibab is in the process of revising the plan to designate approximately 291 more miles of camping corridors, add 14 spur roads, close nine miles of currently open roads and add 24 miles of roads to the districts' open road system.

According to Neal Weintraub, an archaeologist who works for the Kaibab, there are several thousand prehistoric and historic sites throughout the forest. He said many of the sites are very subtle and most users do not notice their presence.

"They are just small artifact scatters that maybe have a pit house depression that many would never recognize," he said.

Weintraub said despite the obvious crushing type of impact vehicles have on lithic and cultural scatters, vehicles can also create new drainages that result in erosion and down cutting of archaeological sites.

"When we have pueblos and big standing walls and things that are pretty glamorous... the majority of the public will try to stay away from that," Weintraub said. "We don't necessarily want to put a sign out there that says this is an archaeological site because we have so many of them."

Along with the damage to archaeological and cultural sites is the possibility of ecological damage said Kaibab National Forest Wildlife Biologist Justin Schofer.

"We are going to cause great resource damage, soil damage, just by being out there when its wet," Schofer said.

Schofer, who also monitors the Mexican Spotted Owl and other bird species for the Kaibab, is also concerned about the impacts off-road travel has on avian life.

"Savannahs and small meadows will often have ground nesting birds and obviously we don't want people driving willy-nilly through those areas either," he said.

Schofer said repeated use in certain off-road areas can also have an impact on wildlife migration.

"You might have a group of elk or it might be a pronghorn movement corridor," Schofer said. "And with repeated driving in an area that shouldn't be open, that will make a whole herd alter its natural movement."

Where do I go then?

Although the Kaibab's Travel Management Plan restricts cross-country travel, other than for the retrieval of game, there are still many places people can enjoy rough roads and challenging terrain with their trucks, motorcycles, Off-highway vehicles (OHVs) and all-terrain vehicles (ATVs) in the forest according to Kaibab Public Information Officer Jackie Banks.

"I think they can get that experience on a lot of our roads," Banks said. "We have a lot of roads that are considered open for motorized vehicle use but still very much provide a lot of those fun kind of ATV experiences without having to go out and create new areas."

Banks said the Kaibab has thousands of miles of open roads and offices have free motor vehicle use maps that delineate the locations.

"You can also get the electronic version for a smart phone or tablet where they can see there are a lot of areas where people can be driving," she said. "Or they can come into the offices and talk to us about finding a road that is a little more remote."

Parker said there are also designated OHV areas on the Coconino National Forest that many people will enjoy.

"If someone is looking for this experience of driving around in circles, my suggestion is Cinder Hills in Coconino National Forest," he said.

Driving off designated routes is allowed anywhere in the Cinder Hills areas, unlike the rest of the Kaibab and Coconino forests. The area was created in coordination with off-road users after the Forest Service prohibited off-road travel on the 53,000 acres around Sunset Crater Volcano National Monument because of resource concerns for the area's unique geology and rare plants.

Safety on the roads

In addition to the resource concerns with ATVs and OHVs, Parker said he spends a lot of time enforcing speed limits and ensuring drivers are in compliance with state OHV laws.

Many roads on the Kaibab require drivers to have a driver's license and their vehicle to be street legal. Other roads only require a driver to have an OHV decal.

"There are roads in the forest like the Dogtown Road that is a street legal road," Parker said. "To operate on that you have to have a driver's license, the ATV has to be insured and the ATV has to be registered with a motorcycle or MC plate."

Parker said children under the age of 18 may not operate or ride an OHV on public or state land unless the person is wearing protective headgear. He said children under 18 should not be operating OHVs at all on roads that require an OHV to be street legal.

"This time of year ATVs are my biggest customer," he said. "On all these roads the speed needs to be reasonable and prudent, so it leaves a lot on the shoulders of law enforcement to just what is reasonable and what is not."

Parker said every year there are serious OHV accidents on Forest Service lands. He said two young girls were killed on the Sycamore Point Road around 2008 when they lost control of their ATV when going down a steep incline. The girls were ejected from the ATV and hit a tree.

"We've been fortunate since I've been here that we haven't had any child fatalities," he said. "We've come close though. It's still Arizona and people have the mindset it's just an ATV and they grew up riding them."

Parker said the Vehicle Use Map delineates which roads require OHVs to be street legal.

The future of the forest

Marcos Roybal, National Environmental Policy Act specialist for the Kaibab, said travel management on the Kaibab is an evolving process.

"Through adaptive management, we are trying to improve the travel system in accessibility for the public while also protecting all the resources we are charged with as land managers," he said.

Weintraub said he also thinks the Kaibab has made progress with education in the past few years and feels work with youth is important.

"I think it's going to take a long time," he said. "We're talking about a history of motorized travel almost 100 years old in the National Forests. Generations of people learned that was how they could use their public lands and now we're telling them to change their behaviors."