Juniors All-Stars battle to the end in District championship 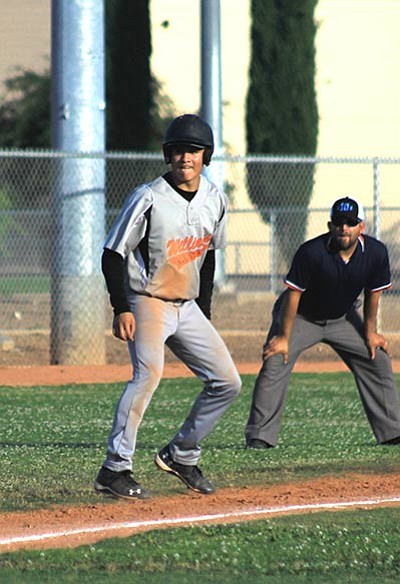 Williams Juniors All-Stars came out fighting in a tough game with Verde Valley July 12. Verde Valley had previously beat Williams 18-4 to knock them into the loser's bracket.

Despite being the underdogs, Williams came out fighting behind the pitching of Bryant and held the Verde team to one run through the second inning before Bryant had to come out of the game because of elbow soreness. After a pitching change by Williams and a few defensive errors, Verde got in two more runs to lead 3-0.

Williams struggled after the pitching change as Verde scored two more runs in the bottom of the third to lead 5-0.

However things began to turn around for Williams in the top of the fourth. A Chance Pearson walk led to three stolen bases to put Williams on the scoreboard. Despite a pitching change by Verde, Williams continue a steady assault on the team.

Payne followed Pearson with a base hit and Dorian Ayala walked. Zain Grantham hit a liner over the third baseman to load the bases for Williams. Payne streaked home on a passed ball and players advanced on a Mario Vasquez base hit. Caesar Santana got hit by a pitch which brought in Ayala. Alex Howell followed up with a double to center which brought in two more runs to bring the score to 5-5.

Santana and Howell stole bases and Santana scored on a passed ball to bring the score to 6-5. Pearson was brought back up to bat and walked. Howell came in on a passed ball and Williams ended the inning leading 7-5

Verde came back up in the bottom of the fourth but was held scoreless by the dominant pitching of Payne. Payne struck out the first batter and the next two batters were thrown out by short stop Grantham to Santana at first.

Williams came back up to the plate in the top of the fifth and on two outs brought in two runs. Ayala walked, which was followed by a Grantham double. Vasquez knocked a triple to deep left which brought in Ayala and Grantham to move the score to 9-5.

Payne continued to work on the Verde team and only allowed one run before being replaced by Santana. Another run scored and Williams finally closed the inning still leading 9-7.

Williams tried to improve on their lead in the sixth but only brought in two runs to turn the bat back over the Verde leading 11-7.

Verde rallied hard in the bottom of the sixth with a base hit, a walk and a deep hit to center that brought in three runs to move the score 11-10.

Williams scored two more in the seventh, but Verde was allowed one more at bat, which brought in two runs to take the win 13-12.

The loss ended the season for the Williams Juniors and Verde Valley advanced to the State tournament in Tucson July 16.