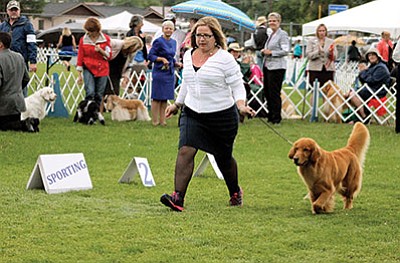 After 22 years putting on their annual American Kennel Club shows at Ft. Tuthill in Flagstaff, the club moved its show to Williams last year.

According to the FKC publicity coordinator the Ft. Tuthill site was becoming more difficult to use because of the heat and deterioration of the asphalt. The group began looking for a new location and Parks resident and FKC member Denise Dean suggested Williams.

Dean, a national confirmation judge, has raised Bernese Mountain dogs, English Sheep dogs and Berger Picard dogs in northern Arizona for many years. She is a member of FKC and has been the Dog Show chair for the last 30 years.

"It was nice to get to Williams last year," Dean said. "The city does a wonderful job maintaining the grass."

Dogs, handlers and owners from all over the country will be at the event, although most entrants are from the Southwest.

Approximately 900 dogs registered for the show last year and Dean said about the same amount are registered this year. They will compete over a two-day period. American Kennel Club judges will evaluate confirmation and obedience trials each day. There will also be a special division for youth.

"We have a junior handlers program," Dean said. "It is its own class, just for kids to show. Last year we had 20 to 30 kids participant. It's a lot of fun for families.

Each breed competes in confirmation, obedience and rally trials. Each breed's parent club creates a standard, which is a written description of the ideal specimen of that breed, which generally relates to form and function. Most standards describe general appearance, movement, temperament, and specific physical traits. The dog that is the best representative of the breed is awarded Best of Breed.

The winner of each Best of Breed will go into the variety groups to compete next. The variety event divides the dogs into groups such as sporting, herding, working, non-working, hound, toy and terrier. The winner of each variety group then advances to the Best of Show trial. The events are scattered throughout each day and a schedule will be posted at the event. The Best of Show trial will begin around 2:30 or 3 p.m.

Dean said Sunday events are the same as Saturday except the judges rotate.

The show will have the same theme as last year with handlers being encouraged to follow a casual western theme instead of the usual elegant dressing found at most shows.

Spectators are encouraged to attend, although American Kennel Club rules prohibit unregistered dogs from the grounds.

The show will have a variety of vendors at Cureton Park serving food and selling dog related products. Admission and parking is free. Show hours are 8 a.m. to approximately 5 p.m. More information is available at www.flagstaffkennelclub.com.