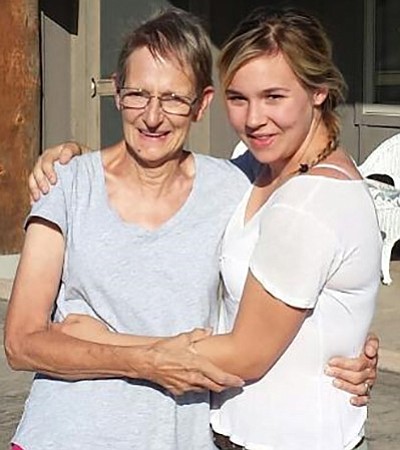 Linda Schleizer is seen here in this undated photo. Schleizer has been missing since Saturday, July 16, in Ash Fork. Submitted photo

Schleizer walked away from her home outside Ash Fork around 4 p.m. July 16 and never returned home. Schleizer suffers from severe Alzheimer's and when stressed has a tendency to withdraw and may have panic attacks. Schleizer will not answer to her name when called.

Schleizer commonly walks around the family's property and normally returns home. She is an avid hiker. It is unknown how far she may walk. The family home is about 8.4 miles northwest of Ash Fork and about 4.7 miles north of Interstate 40.

The search is being conducted by Coconino County with assistance from the Yavapai County Sheriff's Office, Arizona Department of Public Safety Ranger Helicopter out of Flagstaff, Kaibab Estates West Fire Department and Ash Fork Fire Department.

"We had a big push yesterday with ground personnel - dogs, mounted, ATV, jeep and three helicopters," said Rex Gilliland with the CCSO.

"We had a big push (July 18) with 60 resources," he said. "We've developed no clues at this point so we are still actively involved in the search."

Gilliland said the search area has not been expanded and is staying fairly close the area Schleizer went missing.

"We are dealing with such a vast area and the private property parcels are 40 acres and are large by themselves," he said. "There is so much area we need to search and clear the segments we've identified now before we start to expand. We believe that her Alzheimer condition and physical health is such that we don't think at this point that she was able to go very far, but we don't know yet."

Anyone with information on the whereabouts of Schleizer should call the Coconino County Sheriff's Office at (928) 774-4523.