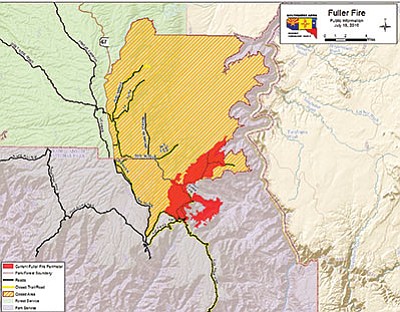 The Fuller Fire on the North Rim of Grand Canyon National Park is being managed by multiple interagency operations. Photo/NPS

GRAND CANYON - NORTH RIM, Ariz. - As of July 18, the Fuller Fire on the North Rim of Grand Canyon National Park (GCNP) is growing in an easterly and northeasterly direction reaching more than 13,685 acres. The fire has not reached the Navajo Nation but reports of heavy smoke is impacting areas of Cameron, Bodaway/Gap, Coppermine, Kaibeto, Inscription House, Shonto and Kayenta.

The lightning caused fire started June 29, by Friday, July 15, 20 mph winds from the south and southwest caused the fire to grow to 2,949 acres. Over the weekend the fire consumed an additional 10,736 acres growing to a total capacity of 13,685 acres.

Fire managers said higher humidity was slowing fire growth and ecological benefits were present. Around 554 personnel are assigned to the fire.

"This fire will help restore and protect the beauty and health of this forest for generations to come," said Chris Marks, National Park Service deputy fire management officer. "This is an incredibly unique opportunity for visitors to see not only the canyon itself, but fire playing its role on the land."

Higher humidity throughout July 18 reduced fire spread along most of the fire perimeter. Firefighters said they will continue to hold and strengthen existing firelines along Cape Royal Road. Crews will utilize existing roads and dozer line in the northeast to limit future fire spread in this area as the fire moves in grass areas. Pending favorable conditions, burnout operations may occur to strengthen this fireline.

Helicopters were utilized for reconnaissance flights and dropping water on the northeast side of the fire.

With moderated fire growth, fire mangers anticipate light smoke from the fire activity. Smoke may spread to the northeast reaching into Page, Kayenta and the northeast areas of the Navajo Nation. More information on smoke and air quality is available at wildlandfire.az.gov/links.asp#smoke.

More information on drones and firefighting efforts is available at www.nifc.gov/drones.