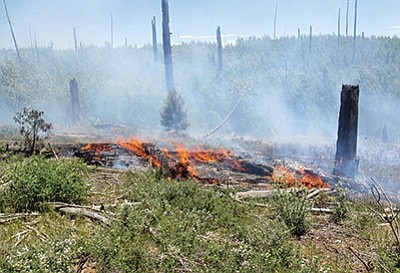 As of July 15, the Fuller Fire on the North Rim of Grand Canyon National Park has grown to around 2,949 acres. Photo/KNF, USFS

GRAND CANYON - NORTH RIM, Ariz. - Today winds from the south and southwest, up to 20mph, with a low relative humidity of 9 percent led to continued growth of the Fuller Fire on the North Rim of Grand Canyon National Park (GCNP).

The fire has reached around 2,949 acres.

The north end of the fire is burning aspen and Ponderosa Pine. Firefighters are using dozers on the Kaibab National Forest (KNF) and hand lines to tie into Forest Road 610, which serves as a natural fuel break. Burnout operations are being conducted from the main fire, west along Forest Road 610 to establish a buffer of burned fuel to help confine the fire south of the boundary with the park.

The west side of the fire is burning in spruce/fir that has not been burned in recent history. However winds from the South and Southwest are keeping the fire's spread west in check.

On the east side of the fire, the fire continued to progress toward Point Imperial. In some areas, burning fuels have rolled over the rim onto benches in the canyon below.

On the southwest side, firefighters completed hand line from the Fuller Canyon Road west to Highway 67 to help limit progression further to the southwest.

The southern end of the fire is burning in mixed conifer. In this area, firefighters started prepping from the southwest finger east to the junction of the Point Imperial and Cape Royal Roads.

Seven miles northwest of the fire, firefighters are prepping around the historic North Rim cabin and Fire Lookout Tower in the event the fire moves further west.

Helicopters were utilized for reconnaissance flights and dropping water on the northeast side of the fire.

Crews will continue to prep along Forest Road 610 and may continue ignitions to strengthen the fireline if weather conditions are favorable. Firefighter also plan to conduct firing operations along the Point Imperial Road as needed. Fire managers will continue to use a full range of actions to direct or minimize the spread of fire as needed.

Fire managers continue to focus on trying to keep the fire East of Highway 67, north of the Fuller Canyon Road and Point Imperial Road, and south of the Forest Road 610 Road and Saddle Mountain Trail.

Conditions are expected to be hot, dry and windy through the weekend.

Smoke is visible from Highway 67 and the North Rim, Kanab, Marble Canyon, Cameron and the South Rim. Winds from the West and Southwest are expected to continue to move smoke toward the East and Northeast. If it looks smoky, you may want to limit or avoid exercise or other outdoor activities. More information on smoke and your health is available at http://wildlandfire.az.gov/links.asp#Smoke.

A Temporary Flight Restriction (TFR) is in effect. Fire managers are asking the public not to fly drones near wildfires: Please remember, if you fly, we can't. Drones near wildfires are not safe. More information on drones and firefighting efforts is available at No Drop Zone.