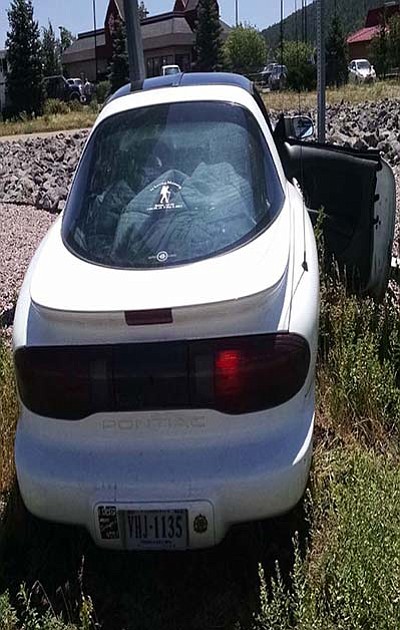 "We had five DUI arrests this weekend and many other calls," said Williams Police Chief Herman Nixon.

Officers responded to Grand Canyon Boulevard and I-40 exit 163 July 4 for a report of a vehicle accident. Witnesses reported a vehicle struck an Arizona Department of Transportation sign and observed the driver and passenger flee the scene.

When officers arrived they found a white 1997 Pontiac Firebird with the front end embedded in the pole of the sign and no occupants present.

Witnesses followed the occupants of the car to the Williams Rodeo Grounds where Williams Police Department Lieutenant Daryl Hixson took Michael Lawson into custody. Lawson, 23 years old, was determined to be the driver of the vehicle.

Approximately 30 minutes later, police received a call from the Railside RV Park where a man was found running through the park with no shirt or shoes on. Hixson and Nixon arrived at the RV Park and found that a retired police officer who resided in the park had taken the man to the ground after the man attempted to enter a trailer of another resident.

The man was identified as 29-year-old Joseph Kress. Both men are residents of Virginia.

Police later learned the vehicle was reported stolen out of Las Vegas, Nevada and both suspects would be charged with possession of a stolen vehicle.