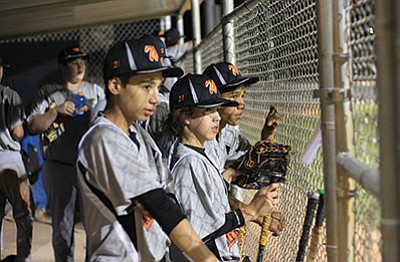 A big fourth inning run eased the Williams Juniors into their first win when they faced Camp Verde July 6. With the game tied at 5-5, the Williams team brought in six runs in the fourth inning to take the lead 11-5 and they never looked back.

Back at the plate, Williams got on base when Betz walk and stole second by winning a pickle. A double by Santana brought in Betz and Williams advanced 12-5. Howell and Kody Kelley made it to base on walks but were left stranded with a final pop out at third.

Key defense kept Camp Verde at bay in the sixth and seventh innings. Vasquez, playing center field, saved a run with a diving catch in the top of the sixth. Two Howell-Santana plays got the remaining two runners at first.

Camp Verde kept Williams from getting on base in the bottom of the sixth, but Williams held Camp Verde in their final at bat to take the win 12-5 and move on to face Chino Valley July 7.

The Vikings faced a tough Chino Valley team that went into extra innings July 7 in Camp Verde for game two of the District 10 All-Star Tournament.

Williams got on the scoreboard early in the first with runs brought in by Grantham, Vasquez, and Betz. Chino Valley was held scoreless in the bottom of the first and a double in the second by Betz brought in Vasquez and Dorian Ayala to stretch the lead 5-0.

Chino Valley quickly rebounded in the bottom of the second and brought in five runs to put Williams and their fans on the edge of their seats ast the game tied 5-5.

The third inning remained scoreless for both teams with Williams finally breaking through in the fourth to bring in three runs to take the lead 8-5.

Chino Valley rallied with two runs in the fourth and two more in the fifth to take the lead 9-8.

Howell got on base in the seventh and Payne was brought in to pinch run. Despite a strikeout and a fly-out at center, Payne managed to steal two bases and was brought in on a Vasquez single to even the score 9-9 in the top of the seventh.

Chino Valley failed to score in the seventh which pushed the game into extra innings.

Williams came out swinging and brought in four runs to bring the score up 13-9 and Chino Valley had a big rally, but could not undo the damage. Williams took the win 13-12 to move to game three.

Williams faced the Verde Valley Juniors team July 9 where they struggled against tough pitching. Verde Valley closed the door on Williams with a 13-4 win.