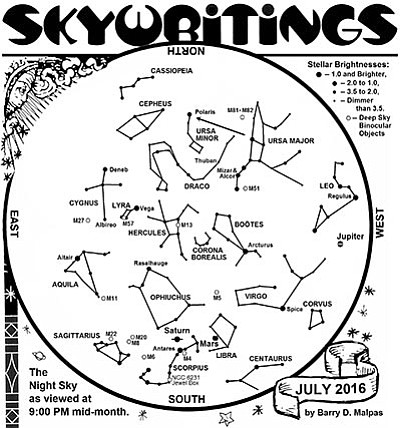 Saturn, named for the Roman god of the harvest, Saturnus, is the dimmest of the original five planets to the unaided eye.

However, it is by far the most strikingly beautiful and interesting of all the planets in our solar system, mainly because of its prominent ring system which extends out several times the diameter of Saturn.

Not until the Italian scientist, Galileo Galilei, turned his telescope on Saturn in 1610 did anyone realize that the planet had something special about it. But because of the primitive quality of the homemade optics of his telescope, Galileo didn't initially realize what he was looking at and first reported the two large protuberances on either side of the planet as ears and later as possibly two large moons on either side. Two years later, however, the objects mysteriously disappeared. It wasn't until 1655 when the Dutch astronomer, Christiaan Huygens, using a better telescope, realized that they were actually rings. Once this became known the disappearing act became clear. As Saturn orbits around the sun, about every 15 years, its rings become viewed edge-on from Earth. While the diameter of the rings is 175,000 miles across, they are only about 30 feet thick. Because the rings are so thin, they appear invisible when viewed edge-on through small telescopes, much like looking at a CD along the thin side. The last time this happened was in September of 2009.

Huygens was also the first to discover Saturn's largest moon Titan, the second largest moon in the solar system after Jupiter's moon Ganymede, and even larger than the planet Mercury. Later, the Italian-French astronomer, Giovanni Cassini noticed a large gap in the rings of Saturn, later named the Cassini Division. He was also the first to observe four more of Saturn's moons: Iapetus, Rhea, Tethys, and Dione. Currently, Saturn has more than 60 identified moons. The most recent ones were discovered by the large telescopes on Mauna Kea Observatory, Hawaii, and by the Cassini satellite orbiting the planet. Most of the moons were created as Saturn evolved, though many are asteroids later captured by Saturn's gravity.

For over two centuries the physical nature of the rings was under contention. Were they made of small particles, dust and rock, or were they a large solid thin disk? In 1874 Sonya Kovalevsky, a Russian mathematician, presented a paper on the dynamics of the rings of Saturn where she calculated and concluded that the rings must be made of particles rather than a solid disk because a solid disk would not be able to undergo the great physical stresses involved. By the late 1800s the science of spectroscopy, and the understanding of "spectral red shift", also known as Doppler Shift, had been developed to the point that, when applied to Saturn and its ring system, it showed that the outer rings moved slower than the inner rings (similar to the outer planets moving slower around the sun than inner ones.) Had the rings been a large disk the outer rings would move faster than the inner ones. Hence, this is the data that proved conclusively that the composition of the rings were particles.

It wasn't until the 1979 flybys of the two Voyager missions, and more recently, in 2004, when the Cassini orbiting spacecraft arrived at Saturn that the most detailed exploration of the planet and its moon system began. Cassini has performed multiple flybys of many of Saturn's moons and sent back thousands of images. Besides finding many new moons, a new ring, along with many fine details within the ring system, Cassini also discovered seas of liquid hydrocarbons on Saturn's moon, Titan.

When observed through a telescope, Saturn's upper atmosphere has a yellowish hue because of the ammonia it contains. The total atmosphere is composed of about two-thirds Hydrogen and one-third Helium, with traces of Nitrogen, Oxygen, Carbon and Iron. Even though the planet is huge, Saturn rotates in 10 and three quarters hours, and its average density is less than that of water (i.e. given enough water, it would float.) Though Saturn has no great red spot like Jupiter, it does have several large white spots which are similar, massive hurricane-like storms. Several space probes have recorded wind speeds over a 1,000 miles an hour in Saturn's atmosphere which are fastest at its equator. At Saturn's North Pole there is an hexagonal cloud pattern that is unique in the solar system. Saturn also exhibits auroras similar to Earth's Aurora Borealis and Aurora Australis - images which have been captured by the Hubble space telescope in Earth orbit. These auroras are caused by the charged particles in the solar wind being trapped by Saturn's intense magnetic field.

The Williams Monthly Star Party meets July 15 for a view the moon, Jupiter, Mars and Saturn.

Members of the Coconino Astronomical Society, in conjunction with the city of Williams, will host a free Star Party from 7:30 to 9:30 p.m., at Glassburn Park, in the natural area west of Rod's Steakhouse parking lot. Several large telescopes will be on hand to view the moon, planets and other celestial objects.