Rotary on the Rim wraps up successful year 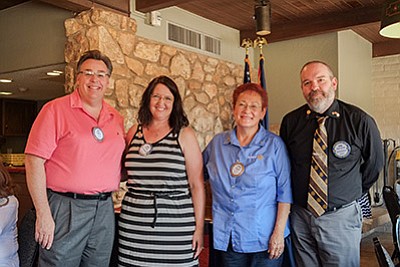 GRAND CANYON, Ariz. - ClayAnn Cook presided over her last meeting as president as Rotary on the Rim turned over a new year of leadership during its June 29 meeting. New officers were welcomed and annual awards were presented at the meeting.

"This is going to be such a significant year in Rotary," said David Simmer, assistant governor of Rotary District 5490, who visited the club from Sedona. "It is such a thrilling time. This might be the year we finally eradicate Polio. There are only 27 cases in the world this year. This is also the 100th year of the Rotary Foundation."

Rotarians have helped immunize more than 2.5 billion children against polio in 122 countries, according to Rotary.org.

New officers for the Rotary this year are: Yvonne Trujillo as president, Rob Gossard as president-elect and Marty Harris as secretary. Julie Aldaz remains club treasurer.

Cook was recognized for bringing in five new members to the Grand Canyon Rotary.

Additionally, members were awarded with Paul Harris Fellow recognition which acknowledges individuals who contribute, or who have contributions made in their name, $1,000 to the Rotary Foundation of Rotary International.

Sue Winchester, Becky Wirth and Marty Harris were recognized as Paul Harris Fellows. Paul Harris Fellows + 1 is for members with contributions of more than $2,000 and included Julie Aldaz, ClayAnn Cook, Rob Gossard, Yvonne Trujillo and Clarinda Vail. Paul Harris giving for Rotary on the Rim members is over $93,000.

"I would re-name this award - I would call this the Paul Harris Humanitarian award because that is what it is really about," Simmer said. "This is about our giving money, as a club or individually, to help individuals who we might never meet for things we might never know and who will never know our names and that is what humanitarianism is about."