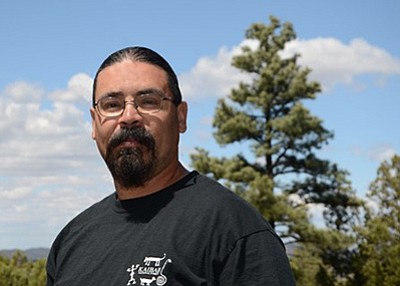 WILLIAMS. Ariz. - The head fire official on the Kaibab National Forest was recently recognized for his achievements with two notable awards.

Arthur Gonzales, who has served as the forest's fire staff officer since August 2011, was named the USDA Forest Service Southwestern Region's Forest Fire Management Officer of the Year for 2015 as well as recognized as the Outstanding Student in an advanced fire behavior course by the International Association of Wildland Fire.

"When I found out I was selected for these awards, I felt surprised, proud and very humbled," Gonzales said. "I don't do this job for recognition. I do it because I love the work and the benefits I see that it provides to not only me as a forest user but also to my family and my community."

Gonzales was selected as the fire management officer of the year for his contributions in leading a progressive, balanced fire program on the Kaibab and for leading by example and working in a productive, interdisciplinary environment with other staff areas. He was honored by the cadre of the S-590 Advanced Fire Behavior Interpretation course based on his demonstrated leadership and support of colleagues during the challenging class, which was held at the National Advanced Fire and Resource Institute in Tucson in March.

"Arthur is a great example of honesty, integrity and duty. He truly loves what he does and his passion shows," said Kaibab National Forest Supervisor Heather Provencio. "He is innovative and forward thinking and is never satisfied with the status quo, but rather is always looking for a more efficient and better way to complete a task, accomplish a job, run the forest, or move the agency forward in some way."

Under Gonzales' leadership, the Kaibab National Forest doubled its 10-year average in prescribed fire accomplishments in 2015. More than 16,000 acres were treated, which was the most ever for the forest.

During the same year, there was a total of 21,551 acres burned by wildfires on the Kaibab. Of those acres burned in wildfires, a 98 percent, or 21,111 acres, were from wildfires managed for natural and cultural resource objectives and benefits including grassland restoration, wildlife habitat improvement and overall enhancement of forest health. The Kaibab's five-year average for acres from such fires was top in the Southwestern Region, with 24 percent of the region's total coming from the forest.

"All the work we do is intended to benefit the ecosystem, and the communities we live in are part of that ecosystem," Gonzales said. "I'm as big a user of our National Forests as anybody else out there, and I recognize that fire is essential to continuing to have this amazing place and the opportunities that stem from it."

Since 2003, a total of 170,596 acres have been successfully managed to achieve natural and cultural resource objectives on the Kaibab National Forest including this year's 5,983-acre Bert Fire on the Williams Ranger District, which allowed fire to be used as a tool to begin important grassland restoration work in the area.

"Throughout my career, I have been fortunate to have developed an understanding of how fire has shaped landscapes and how it has been critical in developing and providing the opportunities I so greatly enjoy in the outdoors," Gonzales said. "With this understanding of the role of fire in ecosystems, I have dedicated myself to a career in fire management, with a particular focus in using fire to maintain and enhance landscapes so that everyone can experience all the opportunities that our public lands have to offer both now and into the future."

Besides actual treatment on the ground, Gonzales' leadership has proved innovative in a myriad of other ways. In late 2015, an informational video was released explaining the importance of wildland fire in the ecosystems of northern Arizona from the perspectives of various Kaibab National Forest natural and cultural resource specialists. That video, entitled "Keeping Fire on the Ground: Resource Specialist Perspectives on the Kaibab National Forest," stemmed from Gonzales' desire to highlight a part of the wildland fire world that most people never get to see. Gonzales took a truly unique approach to tell the story of wildland fire by highlighting some of the unsung heroes on his unit. He is using the video to help educate employees across the agency, raise awareness, and highlight the collective efforts necessary to build a successful wildland fire management program.

"Arthur is by far the finest fire management officer I have had the pleasure of working with in my nearly 30-year career," Provencio said. "His depth of knowledge and experience in fire, combined with his strategic thinking and strong leadership among all resource areas within the agency, make him more than deserving of this recognition and the awards that he has received."