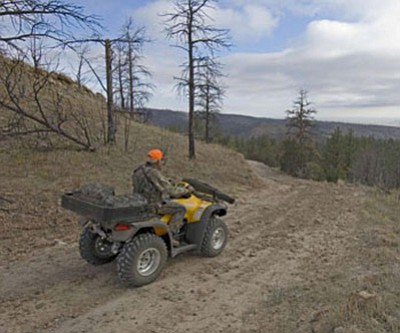 A hunter uses his ATV on forest service land in Arizona. Photo/USFS

PHOENIX - The state of Arizona and Office of the Arizona Attorney General June 24 filed a motion to intervene in a lawsuit brought by several environmental groups challenging the U. S. Forest Service's decision to allow limited off-road motorized big game retrieval by elk and bison hunters on the Kaibab National Forest.

"It's interesting to note that the plaintiffs' lawsuit targets hunters' motorized big game retrieval, which is a small segment of off-highway vehicle use in the forest, but does not challenge other legitimate cross-country motor vehicle use. It suggests their lawsuit was filed more out of opposition to hunting than true concern for our natural resources," said Pat Madden, incoming chairman of the Arizona Game and Fish Commission.

According to Game and Fish, motorized retrieval is an important component enabling the agency to fulfill its wildlife conservation mission. Uncontrolled elk and ecologically devastating bison populations can damage habitat and may harm other species. The Department is currently collaborating with the National Park Service to dramatically reduce the number of bison in Grand Canyon National Park, as unsustainable numbers of bison have migrated from the North Kaibab onto the park's North Rim and are damaging water sources, vegetation, soil and archeological sites.

Elk weigh between 450 and 1,200 pounds and bison between 750 and 2,500 pounds. It is unlawful to leave the edible portion of a harvested animal in the field to waste. For some hunters, a harvested bison or elk can realistically be packed out of the field only by motorized transport.

Motorized retrieval is also an important component of the Department's lead reduction conservation efforts for the California condor. The Department offers free coupons for lead-free ammunition to all hunters who draw tags for big game species on the North Kaibab and sponsors raffles to incentivize the minority of hunters who use lead ammunition to pack out the gut piles of their lawfully-harvested big game species. The gut pile of a mature bison can exceed 500 pounds. It is simply unrealistic to expect hunters to pack out large gut piles without ready access to a motor vehicle.

"The State is seeking to intervene in this lawsuit to protect its sovereign authority to regulate, manage and conserve wildlife in Arizona, including wildlife on public lands managed by the U.S. Forest Service," Madden said. "Hunters play a critical role assisting the Arizona Game and Fish Department in managing elk and bison herd populations."

The Multiple-Use Sustained-Yield Act of 1960 and the National Forest Management Act of 1976 direct that the national forests be managed for multiple purposes, including outdoor recreation and fish and wildlife, and that the jurisdiction and authority of the states for management of fish and resident wildlife on the national forests are not affected.

Off-road motorized big game retrieval historically had not been restricted on the Kaibab National Forest other than in areas with special land use designations, such as wilderness areas. In an effort to balance increasing off-road-vehicle recreational use with resource protection, the U.S. Forest Service in 2005 directed each forest to designate roads, trails and areas open to motor vehicle use. All other areas would be considered closed to off-road motor vehicle use, with a few exceptions such as motorized retrieval of big game. Arizona Game and Fish was a cooperating agency and/or offered comments in the development of the Kaibab's new travel management rules.

The current rules allow hunters one trip with a motor vehicle, during hunting season only, to travel up to one mile off a designated road to pack their legally harvested elk out of the field on the Tusayan and Williams Ranger Districts, or their legally harvested bison or elk on the North Kaibab Ranger District. Hunters are required to use the most direct and least ground-disturbing route, and retrieval is not allowed in existing off-road travel-restricted areas or when conditions are such that travel would cause damage to natural and/or cultural resources. The rules don't allow for motorized retrieval of any other big game species.

"Given the Department's wildlife management responsibilities for elk, bison and the California condor, Arizona has an obligation to intervene in this lawsuit to defend the Kaibab National Forest's authorization of limited motorized big game retrieval to preserve lawful hunting as a wildlife management tool, and in so doing, protect Arizona's fragile natural resources," said Arizona Game and Fish Department Director Larry Voyles.