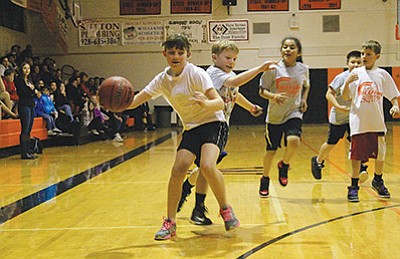 WILLIAMS, Ariz. - Children in Williams are getting a chance to hone their basketball skills this winter with the Williams Youth Basketball program.

Organizer Johnny Hatcher said 40 kids have registered for the program.

Players meet on Saturdays for practice and then are divided into teams to play games. He also has the kids play a short scrimmage during half-time of the high school basketball teams' home games.

Hatcher said he hopes to someday have a Williams basketball league where kids could be assigned a team and have a designated coach, similar to Little League Baseball.

"I'm hoping to get more parents to come out and help," Hatcher said. "I'm looking for volunteers."

Currently Hatcher has one group of six through eight year-olds and another group of nine to eleven year olds. Several parents help with the coaching on Saturdays.

"Right now I'm trying to teach the fundamentals," He said.

Hatcher said he likes to work with the Williams youth in all sports. He thinks it is important to keep them busy and encourage exercise.

"It's important for them to be athletic and keep the weight off," he said. "There's not a lot of recreation for them her. It's not a lot but it's doing something."

The program began in December and Hatcher plans to wrap it up at the end of January.

"I have to get ready for baseball season then," he said.