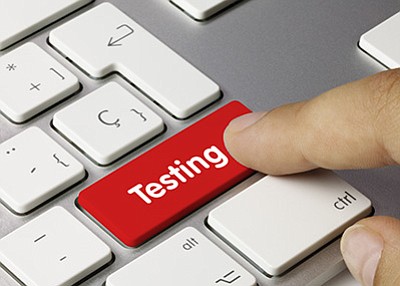 At Williams High School, students will take the AzMerit test in their English and math classrooms. The school has mobile computer labs that will be brought to the rooms. Stock photo

WILLIAMS, Ariz. - Teachers and administrators at Williams' schools are preparing for the spring AzMerit testing in March with a few changes in curriculum and its implementation in the classroom.

"The main thing it to be better prepared," said Honsinger. "There's no tricks here, there's no hoops."

Honsinger said the biggest change this year in the school district is the implementation of the Beyond Textbooks curriculum. Vail School District in Tucson designed the curriculum and according to their website it is more than just textbooks. It is a comprehensive program of curriculum development, instructional improvement, student assessment and multi-level interventions.

"I believe they (the Williams school district) adopted the curriculum a year ago (prior to his arrival) but had not really implemented it fully," Honsinger said. "We've taken large steps into implementing it. We're not 100 percent there yet though."

Honsinger said the Beyond Textbooks curriculum addresses Arizona's College and Career Ready Standards, or Common Core, that Arizona adopted in 2010.

Common Core was developed in 2009 by the Council of Chief State School Officers (CCSSO) and the National Governors Association Center for Best Practices (NGA Center). They collaborated with teachers, school chiefs, administrators and other experts in developing high-quality academic standards that could be applied across the country.

Today, 42 states have adopted Common Core and are working to implement the standards which are designed to ensure students graduating from high school are prepared to take credit bearing introductory courses in two- or four-year college programs or enter the workforce.

Honsinger said he believes Common Core is misunderstood by a lot of people who are opposed to it. He said Common Core is trying to create thinking skills in students instead of memorization skills.

"We call it a higher level of thinking," Honsinger said. "And I'm all for it."

Prior to becoming a principal and superintendent, Honsinger was a math teacher. He said he always taught creative thinking and problem solving in his courses anyway.

"I probably have been teaching Common Core for years," he said.

"We're working at getting better teaching methods," Honsinger said. "And we are trying to get better engagement from the students."

Honsinger said teachers are moving away from teaching the lower order of memorization such as reading and repeating types of skills and encouraging students to evaluate, analyze and create.

"They (the school district) were just trying to figure out how to take the test," Honsinger said. "Do we have enough computers? Do we have enough bandwidth? How are we going to send the results to the state?"

District Technology Director Gabi Uebel prepared the computers for testing last year and will do it again this year. She said she believes some of the results were affected by the students understanding of the software.

"At the end of the test there was a button to click to go back and fix any unanswered questions," she said. "Many kids missed that and didn't go back."

Honsinger said he was glad the district took the plunge and had the kids take the test via computer instead of the print based method. He said that will help students with the next round of testing.

"They gave schools the option, but eventually it will not be an option to use print," Honsinger said.

One difference students will see with testing this year is the location. At the high school, students will take the test in their English and math classrooms. The school has mobile computer labs that will be brought to the rooms.

"It will be a very familiar setting to them," Honsinger said. "We've already been doing some computerized testing throughout the year, so they've already had that."

Despite these changes, Honsinger and Williams Elementary-Middle School Principal Carissa Morrison believe improvement in AzMerit test results will be achieved over the long-term. They said there are no quick fixes, just consistent teaching and engagement.

"If you're a football team you hope you can perform well on that big game night," Honsinger said. "But you better prepare months ahead of time before you get there. That's the real difference in determining what the end score is going to be."

Morrison said her students are being prepared every day with teachers delving deep into the state standards. She said her teachers are asking students to use their critical thinking, problem-solving and creativity skills more than ever.

"I like this Aristotle quote 'We are what we repeatedly do. Excellence then is not an act, but a habit,'" she said. "This approach can take time to achieve maximum impact, but is has more staying power than Band-Aid quick fixes."

Morrison said the elementary-middle school students will take their tests in physical computer labs and in classrooms with mobile labs. She said they will test in small areas that are more comfortable for the children.

"Teachers need to be given time and training in order for fidelity to occur," she said. "We have been able to provide these to teachers this year but we have tried not to overload them. We're keeping our focus simple and streamlined."

Both Morrison and Honsinger believe their students will be better prepared this year. Honsinger said the district is preemptively talking with the students about AzMerit and relating the importance of the testing.

Morrison and Honsinger said parents can have a large impact on the success of their students' education. Honsinger said attendance has been a big problem in the district. He said many parents are often taking their kids out of classes for vacation and appointments.

"We are doing things every single day in our schools," Honsinger said. "There is no day that is not important. With the districts four-day week, I hope somehow they can make their appointments and absences on Fridays. That was the whole idea behind having four-day weeks."

Honsinger said he is encouraged about the upcoming testing and the final semester of the school year.

"We have good kids here," Honsinger said. "I think we are making some really good changes. I see something different going on with our kids and I think those tests scores will show that."