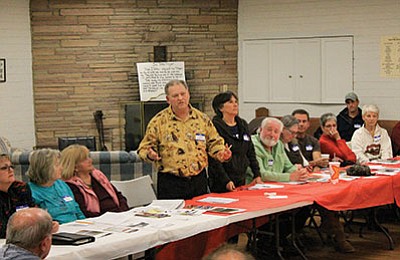 WILLIAMS, Ariz. - Dedicated Williams community members braved the snow Jan. 14 to gather and brainstorm about future events and activities for 2016.

About 45 people attended the second annual Event Huddle to discuss how they could work together to coordinate events and help each other.

Participants from nonprofit groups such as SAVE Meant to Rescue, Kiwanis, and Habitat for Humanity joined with businesses and churches such as Old Trails True Value and Calvary Chapel to discuss their missions and plans for the New Year.

"The Event Huddle is not sponsored by any organization," said organizer Kerry-Lynn Moede. "It's for organizations to put their heads together and discuss their plans and needs."

Moede came up with the idea for the event huddle after hearing different people talk about events that others did not know about or that other people might be able to help with.

"Because it is a small town we are all pretty much using the same volunteer base and same fund base," Moede said. "If you have two groups in town say doing a coat drive, why not put your forces together and do it all at once?"

Moede said rather than different groups competing to put on various events independently, they could work together.

"Why not put your time and resources together?" Moede said. "There are often limited resources with meeting places and equipment. You will only get half the people if you do events at the same time and you're inviting all the same people. Last year there were two tasting dinners on the same night."

Community radio owner Leslie Stevens attended the event with DJ PJ Messimer and was given an opportunity to share what he can do for the community.

"I thought it was extremely enlightening and wonderful," Stevens said. "What is really great about the thing was being able to meet people in town that you never met before."

Stevens said it was interesting to listen to the plans for each group and what their goals were for the year.

"It's a great way to share ideas and meet everybody," Stevens said. "I was surprised that so many people showed up. In our case we are a low-power FM station and a nonprofit, so I encouraged people to bring me their plans and I can announce it on the radio. They can make use of us."

"Dave Remender is a musician at Calvary Chapel and he also has a band," Moede said. "He offered his services to help with other's events. He also offered straw bales from his business for events."

Moede said many cooperative plans were outlined at the meeting. She said there was discussion about doing collaborative fundraising.

"We could do fundraising together and make more money in one event instead of doing four little ones," she said.

Moede said there was discussion about forming more community groups like exercise classes and outdoor clubs.

"People had expressed interest in a hiking club," Moede said. "What a great idea since we are in an environment that is so beautiful."

Moede said there was talk about repairing the old tennis courts and offering tai-chi and yoga classes.

"He said there are community wide grants that are bigger but you need to have a coalition of what the money is going to be used for," she said. "He is interested in helping groups get together in the application process and hopefully get bigger dollars."

This was the second year that Robynn Eckel attended respresenting SAVE Meant to Rescue. She said she enjoyed the networking and was grateful to get to share ideas for future events.

"I was glad for the turnout of people," she said. "We came up with ideas for future huddles. It would be nice to get a chance to coordinate with groups right there and then, I really like Kerry-Lynn's energy."