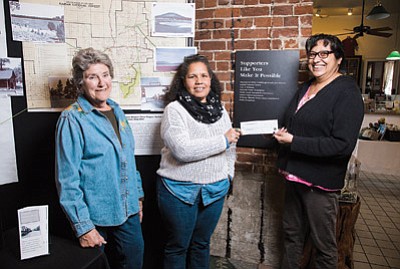 This photo and map display represents the historic evolution of public land from the early Grand Canyon Forest Reserve to the Grand Canyon Monument, the Tusayan National Forest, and then eventually the Kaibab National Forest. The photos, which were taken on both sides of the Grand Canyon, are a representative sample of historic activities and places on the national forest. The maps show a stark contrast in boundaries from the early forest reserve to the 1949 version of the Kaibab National Forest. Display visitors will also note additional changes in forest boundaries even after 1949.

"The historic development of the Kaibab National Forest has played a significant role in the overall history of the city of Williams and our surrounding communities. But few have looked at local history from the perspective of the Forest Service," said Margaret Hangan, heritage program manager for the Kaibab National Forest. "Therefore, the emphasis of this display is to show how the identity and function of the Kaibab

National Forest have shaped our region using the forest's own historic photos and maps to tell the story."

In 2009, the Kaibab National Forest and Williams Public Library formed a partnership to preserve historic images and documents of the city of Williams and the surrounding area. To date there are more than 2,464 photos, documents and oral histories in the collection, and new collections are always being identified. The collection boasts items representing iconic places and themes such as "the Mother Road" Route 66, cattle and sheep ranching, logging and the timber industry, railroads and more. In 2012, 127 of the collection's images were posted online as part of the Arizona Memory Project.

The collection, which is entirely digital, is stored on a computer dedicated to the project at the Williams Library and is made available to the public free of charge. The purpose of the project is to preserve these precious treasures of the past and to make them available to the public for historic research. Hangan and Williams Public Library Director Andrea Dunn have led the multi-year effort to create what is now an indispensable resource for learning about the history of the local area.