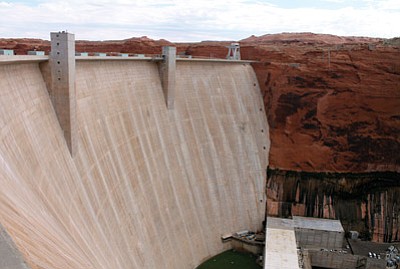 Glen Canyon Dam harnesses the power of the Colorado River in order to provide water and power to cities, industries and agriculture throughout the West. Loretta Yerian/WGCN

PAGE, Ariz. - On Jan. 8 the U.S. Department of the Interior (DOI) released a proposed framework for managing Glen Canyon Dam over the next 20 years.

The goal of the plan is creating certainty and predictability for power and water users while protecting environmental and cultural resources in Grand Canyon National Park and the Colorado River ecosystem.

The draft environmental impact statement (EIS) is available to the public for review and comment for 90 days.

"This document is the result of incredible collaboration and cooperation; bringing together diverse stakeholders of the Colorado River to provide certainty, clarity and predictability around the management and operation of Glen Canyon Dam, so that we can better protect the national treasure of Grand Canyon National Park while continuing to provide water and power to millions across the Southwestern United States," said Deputy Secretary of the Interior Michael L. Connor. "Today's release of a draft proposal for the long-term experimental and management plan of Glen Canyon Dam is based on the latest available science, but public participation is paramount to this process so we encourage all interested parties to join us in this effort to adaptively manage these resources over the next two decades."

The National Park Service and the Bureau of Reclamation led examination of seven possible alternatives in the draft EIS, including a preferred alternative (alternative D) that would provide assurances for water and power users while mitigating adverse impacts on Grand Canyon National Park. There are a number of experimental and management actions that would be incorporated into all of the alternatives. The alternatives including the preferred alternative (alternative D), varied in seven different areas. Some areas included high flow releases for sediment conservation with specific modifications to the frequency of spring and fall high flow experiments (hfe), non-native fish control actions for brown and rainbow trout along with conservation measures related to the humpback chub refuge and the razorback sucker's habitat in the lower Grand Canyon including humpback chub translocation and Bright Angel Creek brown trout control, non-native plant removal, appropriate cultural site preservation of historic properties through a program of research, monitoring and mitigation and other adaptive management measures.

In addition to these elements, recent plans and decisions of the joint-lead agencies and DOI's management actions will be identified under all alternatives. Specific details for each of the alternatives is available to review on a public draft of the plan at http://ltempeis.anl.gov/documents/draft-eis/.

Research and proposed experimental actions under the plan will preserve and improve the resources in Glen Canyon and Grand Canyon while continuing to ensure that water and power needs are met, according to the DOI.

"This is a major step toward enhancing our stewardship of the waters of the Colorado River," said Estevan López, Bureau of Reclamation commissioner. "Now is the time for the public to make their voices heard. Public participation is an integral part of this planning process and the successful management of the dam for the future."

The high-flow experimental releases of water from the dam considered in the draft EIS are designed to mimic the natural flooding of the Colorado River through the Glen and Grand canyons that occurred before the construction of Glen Canyon Dam. Sand stored in the river channel is picked up by high-volume water releases from the dam and re-deposited in downstream reaches as sandbars and beaches. These sand features and associated backwater habitats can provide key fish and wildlife habitat, potentially reduce erosion of archaeological sites, restore and enhance riparian vegetation, increase beaches, and enhance wilderness values along the Colorado River in Glen Canyon National Recreation Area and Grand Canyon National Park.

The preferred alternative identified in the draft EIS continues the high-flow experiments carried out in recent years to help restore the natural ecosystem, but enables continued adaptations and establishes criteria to trigger future releases, which will create certainty and predictability for water users and other stakeholders along the Colorado River.

"Public participation is key to fulfilling our stewardship responsibilities as envisioned under the Grand Canyon Protection Act," said Jon Jarvis, director of the National Park Service. "The long-term planning process has given us and our stakeholders the opportunity to use the past 20 years of scientific information to guide decisions for the next 20 years."

Reclamation and the National Park Service began developing the draft EIS for this framework in 2011. The draft EIS and all its alternatives will be the subject of extensive public hearings and discussion before the comment period closes April 7, laying the groundwork for preparation of a final EIS.

More information about the draft EIS is available at http://ltempeis.anl.gov . To submit a comment, visit http://parkplanning.nps.gov/project/Homecfm?projectId=39292.