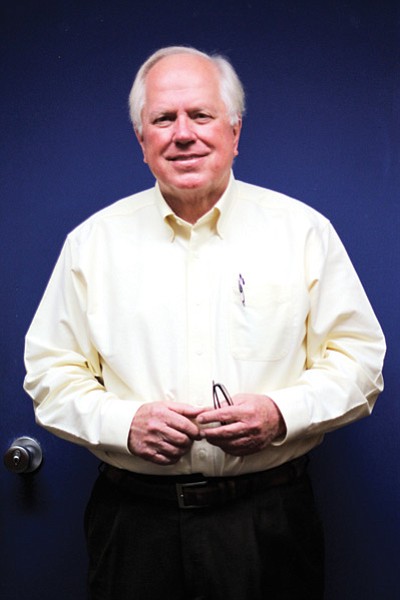 "Dr. Abrego had been a superintendent for several years and the board felt like there needed to be a change and Dr. Abrego had some other opportunities, so he has left and they have asked me to be the principal," Rowland said.

Abrego took his leave of absence at the end of the fall semester and is currently spending time with family in the Chicago area.

"Without (Abrego) here we're kind of short handed," Rowland said. "So the school secretary, who will do anything in the world for this school, and Cyndi Moreno, who is the same way - they've volunteered to take over that responsibility to make sure all of our athletic programs continue."

This is Rowland's first year at the school, however, he has more than 43 years experience as an administrator, teacher, assistant principal and principal.

Rowland and Abrego worked together previously and Rowland had accepted the assistant principal position at the invitation of Abrego. Rowland said Abrego was familiar with his skills and was confident in his abilities. It was decided that Rowland would manage the middle and high school and Abrego would take care of the elementary school.

"I've been a high school and junior high principal for many years and he asked me to take (those responsibilities). So it kind of just fell into place anyways," Rowland said.

The transition to principal was not difficult for Rowland.

"I enjoy working and being in a school house," he said. "It's a great opportunity and it's what I do best. We all have our calling and I think I have the ability to work with students and parents and have success. I hope it continues here."

For the remainder of the school year Rowland said he plans to focus on student achievement. This year, GCS implemented the Beyond Textbook (BT) curriculum and has been working to teach to the standards and improve its academic ratings.

The school recently began implementing its re-teach classes and added a half period at the school.

"We've put in a new period, the re-teach period, so we're now having seven and a half periods a day," Rowland said.

The re-teach classes are designed to help students master math and language arts curriculum and are combined with weekly formative testing.

According to Rowland, the re-teach period is off to a good start.

"It went super well, we were all amazed at how well the students adapted to it and took to the new schedule and how excited they are that we want to do this," he said.

Rowland said the response from parents has been positive as well.

In addition to the re-teach classes school administrators are asking teachers and staff to attend Teacher Professional Development Days.

"We call it the 'Phantom Academy' since we're the Phantoms," Rowland said. "We're a BT school and we re-scheduled so BT can come in and work with us on this re-teach acceleration period and give us guidelines. So we can have the instruction on how to always grow and be better at the re-teach model."

The Jan. 6 Teacher Development Day was canceled due to weather and road conditions. It is re-scheduled for Jan. 20.

"We want to be a part of the national celebration," Rowland said. "We're the only high school and school, k-12, in a national park. So we want some bragging rights. A couple of our students were in the Rose Parade, on the centennial float, but we want all of our students to take part in this. It doesn't come around very often - about once every hundred years."

"We are creating a positive environment for learning here," he said. "One where students are glad to come to and teachers are glad to be part of."