Out of the past: Education, school buildings and a new theater in early 20th century Williams (part 2 of 3) 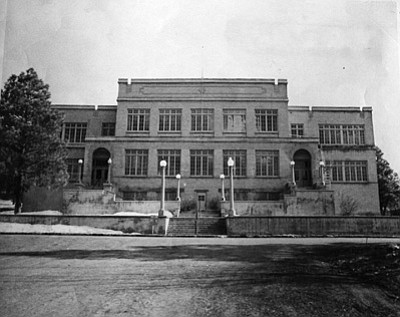 The 1925 Williams High School was the first high school in Williams. It was located on a hill overlooking Williams at Slagel Street and Sheridan Avenue. Courtesy of Williams Public Library Historical Photo Archive

Another notable development in 1925, albeit more important at a local level, was the construction of the first high school in Williams, Arizona.

Up until that year, children of all ages attended school together in the schoolhouse built in 1912 that replaced the original school, built in 1895.

Enrollment was increasing, with total enrollment in 1915 being 260, and the current school building became overcrowded. Talk began about building a dedicated high school. Two wings were added to the building in the early 1920s and in June 1922 momentum for a separate high school building churned through the community.

Supporters believed that not only would children of Williams benefit from a high school building, but the community of Williams itself would reap tremendous rewards for having one of the first high schools in Arizona.

School board members submitted an article in the Sept. 23,1915 edition of the Williams News seeking support for a dedicated high school.

"There are many more boys and girls of high school age in Williams who ought to be in school. It is a poor investment to take a job and fail to get a high school education. The need of Williams is a new high school building; well equipped so that a course in cooking can be offered in the Domestic Science department and a course in machine work in the Manual Training Department... These courses alone would bring students from surrounding towns and from the ranches as there is not a good business college located in any of the surrounding towns...Williams could boast of having the only public high school in Coconino County. There are great possibilities for a school system here. The climate is ideal...a good school system is one of the best advertisements that our little city could have. It will bring the best class of people to our city..."

Principal T.H. Cureton wrote a letter in response saying he and many other taxpayers did not support a new high school building. He believed that the $30,000 the school board requested for a new building was extravagant.

"Many unnecessary expenditures have been made in and about the school this year which leads us to believe that the present school board is not as careful of public moneys as it might be," Cureton said.

Following much discussion and several failed bids for bonds, an election finally passed in April of 1925 to build a high school on Slagel Street and Sheridan Avenue in Williams.

Construction of the high school building began in August of 1925, and was completed in December of that year. The new school was two stories with a boiler room and coal room on the basement level. The building was heated by steam. The second floor had art, domestic science, chemistry and physics classes in addition to a gymnasium and stage. It was said the view from the building made up for the lack of adequate playgrounds and an athletic field near the building.

By 1930, 88 students were enrolled in the high school and 33 eighth graders also attended classes in this building. At this time the grade school had an enrollment of 437 and a dedicated nurse was on staff.

According to the Oct. 1, 1926 edition of the News, county health officials were concerned about school children being underweight. However, the school nurse reported Williams' children showed the greatest gains in the county. She also reported "considerable trouble was found with the childrens' ears and objects such as wax balls, beans and bugs were removed in a number of cases."

According to early editions of the Williams News, the years 1912-1925 were prosperous for Williams. A new business building to contain stores and an opera house was completed by A.R. Bolin on the corner of Bill Williams Avenue and Third Street in November 1912. Dedicated to entertaining the citizens with motion pictures and other attractions, the amusement center was named the Sultana Theater. The sound of "talkie" pictures made its debut at the Sultana and citizens no longer had to drive to Prescott to experience this phenomenon.

People enjoyed the first community Christmas tree in 1914. The railroad provided various entertainment at the Harvey House, and in 1915 the long awaited library building was constructed. The library was supported by donations until 1922 when the town council accepted its services in administering it. The Williams Rotary Club applied for their charter in April 1923, and the Boy Scouts of America had a troop in Williams around 1917 under the sponsorship of F.E. Wells, the owner of the News. The first hospital opened in 1937 by Dr. W. Gordon Garnett on the northeast corner of Grant Avenue and Second Street.

Williams underwent many economic changes in the period from 1911 through 1930. Perhaps most significant was the increased importance of the tourist industry. Residents could see a need to develop that industry to replace the lumber industry as the principal economic support. The Grand Canyon became a National Park in 1919. The population of the town increased from 1,267 inhabitants in 1910 to 2,166 in 1930. The greatest gain was between 1920 and 1930 when the population increased 60 percent. Most believe this was due to the growing importance of the tourist trade.

The Williams-Perkinsville road project began in 1919 and became an unemployment work project in that was ultimately completed in November of 1936. Dog Town Wash reservoir was created in 1935 to help alleviate the inadequate water supply and a chlorinator and filter plant was installed to help with purity and improve the taste. Talk began in 1929 for a city sewer city but nothing was accomplished until 1936. Grazing began to phase out with much of the grazing land falling into the hands of a few large outfits. The industry was of much less value to the town than it had been before.

Time and effort began toward popularizing Williams as the "Gateway to the Grand Canyon" The town had been aided by the routing of U.S. Highway 66 through the town and the construction of the new access road to the Canyon that opened in December 1930. Initial work on a golf course began in the fall of 1927 with a nine-hole course developed. An underpass at the east end of Bill Williams was constructed to eliminate the railroad crossing. Interest in providing Williams with lakes and other attractions grew and the Civilian Conservation Corps created White Horse Lake in 1938. In 1939 a ski course was established ten miles east of Williams near Highway 66. It proved unsatisfactory and in 1941 a new location was found on the north slope of Bill Williams Mountain.

In the May 13, 1939 edition of the News, Babbitt's Thriftway Stores advertised a loaf of fresh baked bread at 8 cents, three-dozen oranges for 28 cents, 10 pounds of potatoes for 18 cents, and two cans of Van Camps Pork and Beans were 15 cents.

Bursting at the seams

The community steadily grew and along with it the enrollment of the schools. For many years the Williams schools, like most schools in the United States, had segregated classes in the elementary grades. According to the August 31, 1939 edition of the Williams News, 650 students enrolled in the 1938-39 school year. The News reported that grades two, three, four, five, seven and eight had an "American" class and a "Mexican" class.

In late 1934 discussion began regarding the construction of a new grade school building, but no action was taken until 1936. According to the Jan. 24, 1936 edition of the Williams News, some of the residents wanted to construct a separate school for the American children and to remodel the old one for the children of Mexican descent. The chief argument against this was that the lumber business was expect to play out within 10 to 12 years and many believe the Mexican population would leave at that time.

School Superintendent FE Dean wrote a letter to editor in the Jan. 24, 1936 edition of the News:

"That the old building should become a Mexican school from primary to seventh grade...is desirable in many ways. The playground will be more adequate, it will be more harmonious as a school, it will develop a school spirit, a school pride of its own...it can give its own programs, plays, etc. Contests can be arranged between the two schools. The Mexican children will not be so directly subject to comparison in grade attainments for a given age and in language. The separation should make for increased happiness and increase pride in both schools."

The majority did not favor segregation though and a proposal to build a new building large enough to house both groups was voted upon. It was badly defeated in February 1936 but finally passed in September 1938. Residents agreed on a $58,000 bond with the remained money coming from a federal grant. Construction on the $115,000 building began in April 1939 and the new grade school was completed the following August.

The new school was erected at the site of the elementary school. The two wings added in the early 1920s were retained. The new project included 18 classrooms, two offices, a basement, an asbestos fire resistant roof and a gymnasium. The construction material was hollow concrete tile, and was hailed as a great improvement for the town as a whole, as well as for the school system.

Editor's note: do you have a story from one of these schools to share? Email whowell@williamsnews.com.