New rapids and other updates for the Colorado River 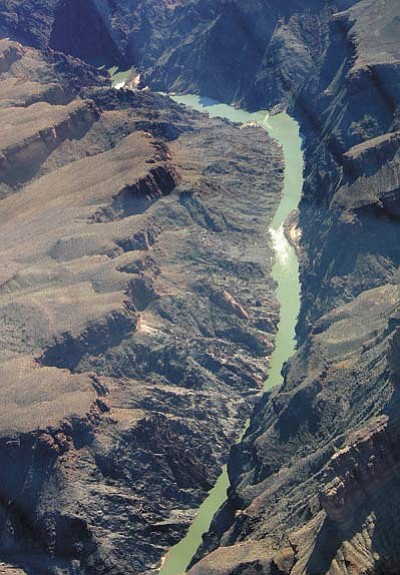 A portion of the Colorado River flowing through the Grand Canyon. File photo

GRAND CANYON, Ariz. - River Runners for Wilderness put out its report of river conditions and updates for those river trips traveling below Diamond Creek in Grand Canyon National Park.

This update covers the Colorado River from Diamond Creek at river mile 226 to the Pearce Ferry Ramp at river mile 280. This riverwire has been abridged, the complete text can be found at the River Runners for Wilderness website at rrfw.org.

New rapids and other hazards

At flows near 12,000 cubic feet per second (cfs), pass either right or left of a rock at the top of 231 Mile Rapid. The next hazard is a mid-river pour-over in the lower third of the rapid. A left run around this pour-over will require avoiding large laterals on the far left. A right run around this pour over will require the running of a medium sized hole. At higher flows of 14,000 cfs and above, this rapid washes out.

Mile 232 (Killer Fang Falls) should be scouted. The run is a right to left ferry across strong current moving toward the right-sided fang. A far left run close to the left shore is also an option and can be scouted on river left. The left pull-in for scouting is upstream of the right side scout and should not be missed. At higher flows of 14,000 cfs and above, this rapid washes out.

Mile 234 rapid is entered on the far right and at flows below 10,000 cfs, has a substantial pour over with exposed rock in the center of the river at the bottom of the rapid. This is easily passed by staying right. At higher flows of 12,000 cfs and above, the entrance is still on the far right, but the hole at the bottom of the rapid is washed out.

Gneiss Canyon Rapid at 236 mile has a large debris fan blocking the right side of the river, with a large hydraulic hole against the left cliff. Pulling in to stop at the potential campsite on river right is very difficult and is not recommended at this time.

Down cutting of the section of the river between Separation Rapid and Lava Cliff Rapid at Spencer Canyon is occurring very slowly, if at all. This is because of a lack of significant flushing flows of 100,000 cubic feet per second or more to remove over 50 years accumulation of large and small boulders and gravel from numerous side drainages in this area of the Canyon.

River runners taking out at Diamond Creek should be aware that a camping fee of $32.55 per person is charged if the group camps at the ramp. Last Chance Above Diamond Creek camp (225.6 mile river right) is a very small camp on the gravel outwash of the side canyon here. The pull-in for this camp is at the top one-third of the debris fan. Camping here is not recommended in monsoon season.

Additional campsites are found at Travertine Canyon at 229.3 left and Travertine Falls at 230.6 left.

Bridge Canyon Camp at 235.3 mile (river left) is campable, but Gneiss Canyon Camp at river mile 236 is no longer campable due to the nature of the rapid at the mouth of this canyon.

There is a large camp at mile 246.3 river left on cobble at Spencer Canyon. A new side canyon gravel debris outwash has made a camp at 247.8 on river left. The Surprise Canyon Camp at river mile 248.7 is large and on a mud and gravel outwash of Surprise Canyon. At water levels of 14,000 and above, this camp requires a hike up a steep bank. There is a very small sized camp on river right at 250 Mile.

The medium sized camp at river mile 264.8 on river right has been cleared of a very spiky legume known as camelthorn, as of December 2015.

A new small camp has formed at the side canyon outwash located at 269.9 Mile on river right. This camp is not recommended in monsoon season.

The camp at 273.7 mile is no longer campable, with a much better option just downstream. A medium sized camp is at 274.1 on river left. The camp at 274.1 is the first camp on river left since National Canyon at 167 mile that is not on Hualapai Reservation land. River runners camping at any of the river left camps on the Hualapai Reservation should be ready to pay $32.55 per person per night.

There is a large camp on river left at 279.0 with another camp just below it. The pull-in for the upper camp is increasingly easy to miss as the river is cutting into this camp shoreline.

The camp that was at mile 280.0 on river right just above the Pearce Ferry Ramp is no longer campable. The camp has lost its pull in due to steep cutbank formation.

National Park Service rangers note that no camping is allowed at the Pearce Ferry ramp and take-out areas.

There is a strong flow of current all the way to Pearce Ferry at this time.

Lake Mead National Recreation Area is not allowing river runners to launch at Pearce Ferry Ramp for the day run to South Cove. River runners arriving from Diamond Creek or Lee's Ferry are allowed to proceed if they wish. An inspection of Pearce Ferry Rapid is highly advisable and will require a difficult portage of 150 yards on river right.

The National Park Service asks river runners to be patient and understanding in the de-rig area at Pearce Ferry as public rafters, Hualapai, and river concessions rafters are all taking out in the same area.

Columbine Falls experienced a major flash flood in late September 2014. The flood moved a substantial amount of river sediment out into the main river channel with the formation of a small riffle. The 37,000 cfs flow of November removed this material but left a large sandy beach at the mouth. A new footpath has been constructed right up the drainage, and goes to Columbine Falls.