El Nino ramps up, set to be one of strongest winters on record 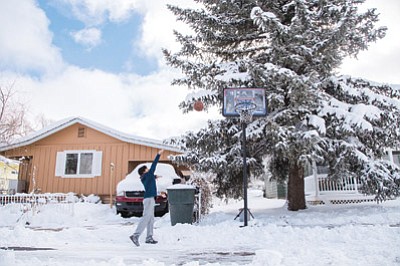 Damien Pacheco tries to get some basketball practice in Friday following a week of snowstorms. Ryan Williams/WGCN

WILLIAMS, Ariz. - According to the National Weather Service (NWS) Climate Prediction Center, this year's El Niño is on pace to become one of the strongest such events on record, as measured by the unusually mild ocean temperatures in a huge portion of the Pacific Ocean. This year's El Niño is expected to be similar to the winters of 1997-1998 and 2009-2010.

El Niño is the warming of sea surface temperatures in the equatorial Pacific Ocean that occurs every two to seven years where the ocean warms for six to 18 months.

"El Niño doesn't mean more intense storms generally," said NWS meteorologist Tony Merriman. "We're talking more frequent winter weather. So we might deal with a four to five inch individual event and then another four to five inches falls 18 hours later. It doesn't have time to clear out so you get these waves that are more frequent and your total accumulation for the season gets higher."

For the Southwest, El Niño results in below-average temperatures and above-median precipitation. The Jan. 9 seasonal outlook lists a 40-50 percent chance of above-normal precipitation for northern Arizona this winter.

According to Merriman, Flagstaff has received a little over 58 inches of snow this season and is close to surpassing last year's total of 62.9 inches.

"We've looked at patterns since 1950 and there have been six strong El Niño Events," Merriman said. "For now this is one of the top two strongest El Niños on record."

The Center predicts that the drought in central and western Arizona will likely be removed following this El Niño season.