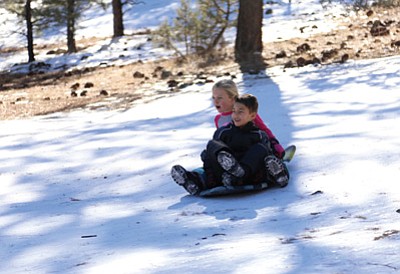 TUSAYAN, Ariz. - With several good snowstorms already hitting northern Arizona this winter there has been an increase in snow related activities, including sledding and making snow angels.

Tusayan Town Councilman John Rueter noticed the increase of these snow enthusiasts along Highway 180 leading from Flagstaff to Tusayan and said maybe Tusayan should consider building a snow play area of its own.

"This is a low-tech activity and low-impact," Rueter said. "It doesn't require the construction of large structures or large capital investments. it basically harnesses what's happening out there as far as the snow when it does come and it gets people outdoors."

According to Rueter, the idea of a snow play area in Tusayan is something town council members have considered in the past.

"Even on a small scale the council would like to increase the recreational opportunities for our residents, especially the youth," he said. "Also along with that is the potential to accommodate some of our winter visitors and perhaps increase their enjoyment when coming to see the Canyon."

Currently, snow play areas for residents or tourists are limited.

"Historically there's been a couple of hills on private property," Rueter said. "They're not that large and private land owners look at things like liability and if they want that kind of use there. But kids will be kids and they'll find a little place here and there."

The nearest snow play areas can be found along Highway 180 outside of Flagstaff or at the Oak Hill Snow Play Area between Parks and Williams.

Meghan Wadlington, from San Diego, California, took her kids to the Oak Hill Snow Play Area to enjoy the rare opportunity to play in the snow.

"There's a limited amount of areas that would work, I think, you don't want it to be too steep of a slope," Rueter said. "Anything like this really needs to be planned out with that in mind because it may be a lot more popular than we may think. When I look at the great success that the county and Coconino National Forest have achieved with its snow play areas, I've really been amazed at how well used the areas were. In fact they're so well used they had some parking and traffic issues. We would need to establish some parking in the area or at least a way people can park and shuttle to it perhaps."

In order for a future snow play area to move forward the town would need to explore and identify possible sites for the area, which could mean getting permission from Kaibab National Forest or other public or private entities that would be willing to have it located on their property.

"We would need to work with the Forest Service or there could be potential for a place for it at the airport," Rueter said. "We don't know if they would be open to it."

One favorable aspect of snow play areas, according to Ruter, is the funding. He believes is should not require a significant amount of capital to get it started and maintained. However, while the idea is open for discussion, the probability of having a snow play area before next winter is slim.

"This will not be an overnight thing at all," Rueter said. "We don't see it as a big, dynamic thing but we do see it as having potential and if it just supplies recreational and exercise opportunities for our families in the area and visitors then great, we've achieved a good thing."

The first step would include obtaining permission from the Forest Service or other entities.

Forest Service involvement would most likely mean having to get a permit and an environmental analysis before permission could be granted. Rueter said a partnership with Kaibab National Forest to utilize and promote the snow play and trail systems in the area would be ideal.

"The Forest Service has put a lot of work into the trail system in the area and we have the Arizona Trail so we have quite a network of trails that can be used year round and incorporating a snow play area in the mix would be helpful for the utilization of that network," he said. "It's all part of building the town and having thing a lot of other towns have and opportunities for our residents."