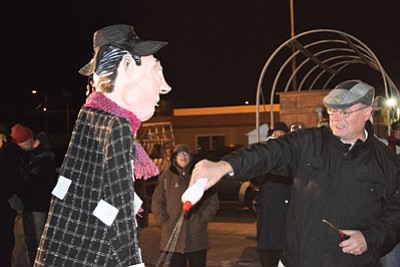 Father Killian McCaffrey from St. Joseph’s Catholic Church prepares to burn an effigy of the old year at a New Year’s Eve celebration at the Wild West Junction. Photo/Corey Tunnel

Father Killian McCaffrey from St. Joseph's Catholic Church burned an effigy of the old year at a New Year's Eve celebration at the Wild West Junction. McCaffrey said this is a 120-year-old tradition that began in Ecuador. The life-size effigy called El Ano Viejo (The Old Year represents something from the old year that a person wants to put behind them.) Guests at the celebration wrote down their negative experiences from the past year and pinned them to the effigy. At midnight the effigy, as well as the things people wish to leave in the old year, went up in flames.