Letter to the editor: Bataan airplane has storied past 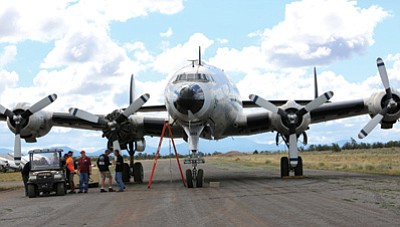 I just finished reading your piece on General MacArthur's Bataan Constellation aircraft and I thought you might like me to fill in some information regarding NASA Goddard Space Flight Center's use of this aircraft.

My name is Charles D. Mason and in 1964 I was head of the Instrumented Aircraft Section at the Goddard Space Flight Center in Greenbelt, Maryland. We were using two "G" model Connies (a reference to Constellations) to check out the worldwide tracking stations of the Manned Space Flight Network.

I obtained these Connies from Navy MATS who was retiring them at Moffit Field in California. Our operation really needed a third aircraft so I went to Davis-Monthan Air Force Base in Tucson to look for an airplane at their storage facility.

Long story short, I was offered an "A" model Connie that was destined to be chopped up for aluminum shortly. This was the Bataan.

Bendix Field Engineering Corp (BFEC) was under contract to Goddard to provide crews and maintenance for the instrumented aircraft operation. I arranged for a crew to come to Tucson, get the aircraft in flying condition and they flew it back to Baltimore.

The Bataan was put through IRAN (Inspect and Repair as Necessary) and I had BFEC install electronics equipment capable of exercising the people and equipment at tracking stations.

In order to train the tracking station personnel and to check out the station electronics, actual spacecraft gear plus other test equipment was installed in racks in the cabin. The aircraft would fly past the tracking station at an altitude and track, which would make it look like an actual spacecraft in orbit. These simulations were performed before every Mercury, Gemini and Apollo mission and at every one of the stations of the Manned Space Flight Network around the world including two tracking ships.

All three of the Goddard Space Flight Center Connies had first class seats installed and a couple of bunks. The crews spent up to three weeks away from the Baltimore home base and often flew on weekends to the next tracking station after spending the week doing the simulations. The typical flight crew was a pilot, copilot, flight engineer navigator and crew chief. The electronics crew was six to eight engineers and technicians.

On long overseas flights, like the ones to Australia, we usually had an extra pilot and/or flight engineer. In support of the tracking station network, Goddard implemented a worldwide communications network, which tied all the stations together and to Houston at Mission Control.

Because of limited range we used the Bataan for checking out the Manned Space Flight Tacking Stations close to the continental USA.

This program lasted through the Gemini, Apollo and Apollo-Soyuz manned space flight missions.

When tracking satellites came into operation all the Connies were retired and the Bataan was flown by a BEFEC crew to Fort Rucker in Alabama where I understand it was somewhat neglected. I like to think that by putting the Bataan to work at the Goddard Space Flight Center.

I personally saved a valuable piece of our WWII history. I retired from NASA in 1988 after 28 years with the agency.