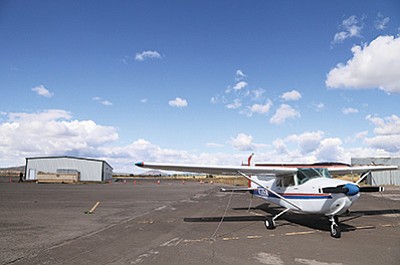 Vision Airlines anticipates one or two flights per day or 506 flights per year into H.A. Clark Memorial Field in Williams. Ryan Williams/WGCN

WILLIAMS, Ariz. - H.A. Clark Memorial Field in Williams is about to get busier.

Vision Airlines will use the terminal to transfer tour passengers from aircraft to tour buses then drive them to the Grand Canyon.

The company plans to use the Dornier 228 aircraft at the airport in Williams. The aircraft can hold up to 19 passengers.

The permit fee is $1,500 per year with a terminal and ramp usage fee of $19 per plane with a landing fee of $13.50 per plane. Vision Airlines anticipates one or two flights per day or 506 flights per year. The city estimates the anticipated revenue to the city will be $17,945. The permit will expire Dec. 31.

City staff discussed, created and reviewed the agreement with airport consultant Bill Harvey of Stantec Consulting and had the permit vetted by legal counselor Brandon Kavanagh.

Williams Public Works Director Kyle Christiansen addressed the city council Feb. 11 and answered questions about the impact of increased flight activity, passenger traffic and general upkeep of the airport facility. He recommended the approval of the operating permit.

In addition to the fees, the operating permit states that the city will be indemnified by the permittee against all liability, losses and damages of any nature except for loss or damage resulting from the negligence of the city.

Vision Airlines must maintain aircraft, airport and automobile liability insurance and the city has the right to terminate the permit at any time without cause.