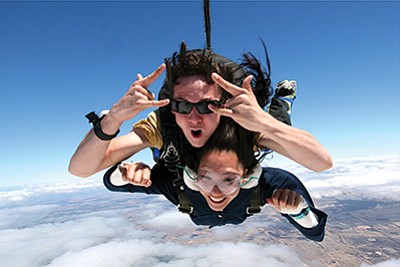 TUSAYAN, Ariz. - Visitors to the the Grand Canyon will soon be able to jump out of an airplane to catch a bird's eye view of the Natural Wonder.

Paragon, a registered Arizona skydiving company that has partnerships with drop zones around the world, is offering a first for the Grand Canyon - tandem skydiving.

"We're the first and only place you can skydive at the Grand Canyon," said Aoife Murphy, who co-owns and operates the company with business partner Jason Theuma.

On March 1 Paragon plans to officially open its doors to offer tandem only skydiving. Paragon plans to operate from sunrise to sunset, 365 days a year. Murphy said they have watched weather patterns at the Canyon for more than 10 years and said weather conditions are ideal for skydivers.

"The statistics here are perfect for skydiving," she said. "Even if you do have windy days or snow the percentage wise in comparison to the days you can skydive are very small, so we reckon we will be jumping 280 days of the year, which is really significant for a skydiving operation."

Paragon's front desk will be located in the main terminal at the Grand Canyon Airport (GCA) in Tusayan. Paragon signed a lease with the airport to open the company. The airport is owned and operated by the Arizona Department of Transportation (ADOT) and according to ADOT spokesman Ryan Harding, Paragon will pay fees in accordance with airport rules, statutes and state laws. Right now the lease is a pilot program to ensure Paragon complies with the letter of agreement it has with the FAA. Paragon received permission by the FAA for tandem skydiving in air space controlled by the airport. Harding said Grand Canyon Airport does not believe tandem skydiving will have any effect on flights at the airport or other air traffic.

"We are doing a pilot program to ensure that what has been written in Paragon's operation procedures and the Letter of Agreement will operate safely and not change the efficiency or hurt the economics of the airport," Harding said. "The FAA conducted a Risk and Safety Assessment. In addition, there was a Risk Safety Management Panel by the FAA that rewrote the Air Traffic Procedures and a new Letter of Agreement with the airport, the tenants, Paragon and the FAA L.A. Flight Center."

Because Paragon is operating in airport controlled air space and will be flying at much higher altitudes than Grand Canyon air tours, they did not need to get permission from the National Park Service to fly at the Canyon. However, Theuma and Murphy said they approached NPS and Kaibab National Forest when the idea was first conceived.

"(Getting clearance from) the National Park Service was not too bad," Theuma added. "They're happy for us to jump because we're not affecting their area so much with the overflights."

Before getting clearance from the FAA, Paragon owners said they underwent strict procedures and were analyzed by both the FAA and United States Parachute Association (USPA) before receiving operational clearance.

"We reckon that with the clientele that come here there might be people that have never thought of doing skydiving before but, hey, they're at the Grand Canyon, it's once in a lifetime and amazing...you're going to be at the Grand Canyon and skydiving and a lot of the people who have never thought about skydiving want to feel comfortable, they want to know that we're very professional and it is safe so that's something that we're definitely working on. We think it's very important," Murphy said.

"Our pilot has 4,000 hours, he's an F-15 Air Force Pilot," Theuma added. "We like to go above and beyond to make sure people feel comfortable."

Because the special flight corridors for helicopters, air tours and other GCA aircraft fly at a certain altitude Theuma said their flights will not interfere with other air traffic. Murphy said Paragon's plane will fly at a much higher altitude and will fly through general aviation zones and while thrill seekers will get a grand view of the Canyon they will not jump into or over the Canyon.

"We don't quite fly the same route as they (air tours) do because we land at the airport so we have to drop over the airport as well," Murphy said. "It's not considered an air tour in any way."

Because the FAA is concerned with overflight noise and safety since Grand Canyon Airport is one of the busiest airports in Arizona, the FAA specifically designed Paragon's descent route and Paragon will only offer tandem skydiving with pilots who have over 4,000 jumps. Paragon also said it will be using only brand new equipment and gear.

"All of our procedures have been cleared through the air traffic control division of the FAA, so everything can integrate," she said. "So with the helicopters and fixed wing flights we're all separated in the air and we know where each other will be."

Tusayan Mayor Craig Sanderson said while he supports new businesses and the economic benefits it could bring to the town, he questions the safety of the operation and is concerned over possible housing for Paragon employees.

"Anything we can do to help the town grow and bring in tax revenue and it's definitely a new clientele. We do have a housing need here -that hasn't changed and even Valle doesn't have a whole lot of room," Sanderson said. "The FAA has been working on addressing (safety), some operators are concerned about parachuting activity at the airport - the close proximity of parachutists and airplanes and helicopters is a concern. The FAA thinks they have it figured out. I'm not convinced. In my experience as an aircraft operator that distance between the parachutists and an aircraft is pretty tight, so I am concerned about having those activities occur simultaneously. I'm not convinced we can do the two together."

Paragon will provide housing for its employees in Valle and said they are starting with 13 employees but could have up to 30. Most of its employees will be seasonal and will rotate throughout the season. Murphy said they plan to hire from the local population as well.

"Skydiving itself is a very labor intensive job," Theuma said.

For successful tandem skydiving Paragon needs around 10 people on the ground who help with communications and packing parachutes in addition to front desk personnel and pilots for each tandem jump.

"For each person that we get through we have about one and a half to two staff per person depending on the size of the group," Murphy said.

Starting out, the company is able to take up to seven people - three customers, three skydiving pilots and one airplane pilot. When they get busier, Theuma said they will use an additional airplane that can take up to nine customers.

Getting started: about Theuma and Murphy

Both Theuma and Murphy have backgrounds running and managing companies.

Originally from Australia, Theuma spent most of his life around the skydiving industry and has a few hundred skydives under his belt. However, it was Theuma's brother who would become an internationally recognized skydiver and daredevil. Theuma decided to stick to the business side of the operation.

"I've been around the whole industry a long time," he said. "I'm more of a business kind of guy so I've been helping out and working on drop zones and helping (Paragon) with safety and business procedures for 15 to 20 years."

"So in the U.S. the FAA don't actually manage skydiving, it's a separate organization, the USPA, and it's the same down there (Nicaragua)," Theuma said. "So we are the authority on skydiving there."

Ireland born Murphy has also spent a significant amount of time around the industry.

"We've both traveled around the world quite a bit and the Grand Canyon is one of the most beautiful places we've ever seen," Murphy said. "We reckon there is actually nowhere better to visit. So we thought, 'hey, why wouldn't you want to skydive here? It's one of the most amazing features in the U.S., I reckon in the world,' getting to see it from the air, freefalling, under canopy, no sound - it's going to bring a whole other dimension."

In 2013, Theuma spent several weeks living in an R.V. outside of Tusayan and studying flight patterns at the airport. Three years later the company is ready to open its doors. On March 1 Paragon is offering reduced pricing for locals who want to skydive and invites the surrounding communities to join them for its soft opening at the main terminal of the Grand Canyon Airport from 8 a.m. to 4 p.m.