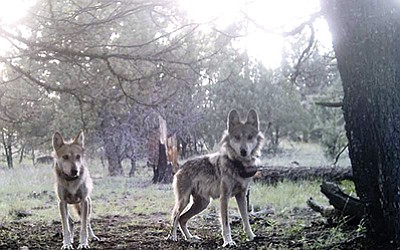 PHOENIX - The Mexican wolf Interagency Field Team completed the annual year-end population survey, documenting a minimum of 97 Mexican wolves in the wild in Arizona and New Mexico at the end of 2015. At the end of 2014, 110 wild wolves were counted.

"These latest population numbers demonstrate we still have more work to do in stabilizing this experimental population and maximizing its anticipated contribution to Mexican wolf recovery," said Benjamin Tuggle U.S. Fish and Wildlife (USFWS) Service's Southwest regional director. "While disconcerting, the drop in numbers represents just one year and our strategy for the experimental population continues to be viable. The Service and our partners remain focused and committed to making this population genetically healthy and robust so that it can contribute to the recovery of the Mexican wolf in the future. We all understand the challenges we face as we try to increase the wild population of this endangered species."

• The USFWS said the population decline in 2015 was a combination of factors:

• There were 13 Mexican wolf mortalities compared to 11 in 2014. Of these 13 mortalities, nine were females and four were males.

A significantly lower proportion of pups survived to December, relative to last year: 55 percent survival in 2015 compared to high 86 percent in 2014.

"We cannot be certain if this abrupt decline is an anomaly, as our trends since 2010 had been more encouraging prior to this year, including a 30 percent growth in 2014," said Sherry Barrett, USFWS's Mexican wolf recovery coordinator. "Although there are many dynamics that may have contributed to this year's count results, we will carefully analyze the contributing factors to try to actively reverse this decline."

"Recovery of endangered species is never easy, nor is the road to success a straight line," added Jim DeVos, assistant director of wildlife management for the Arizona Game and Fish Department (AZGFD). "The lower number of Mexican wolves that were counted is a concern, but not a signal that the program is unsuccessful. It is important to look at a number of population demographic factors such as the number of pups born this year, which is only two less than last year. Of the 21 wolf packs on the ground today, 10 successfully reared a litter through the end of this year. Wildlife populations vary on an annual basis, so the decline in the number of Mexican wolves counted this year is not out of character."

Assistant Director DeVos continued, "The cooperators in this project have worked hard to get to where we are with this recovery program and in the long run, although there is much work to do,  we should not forget where the Mexican wolf was in 1998, when they were absent from the wild landscape. Simply, the wolf population is on a long term upward trend."

The results of the surveys reflect the end-of-year minimum experimental population for 2015. The annual population number is derived from on-the-ground surveys conducted by the IFT from November through December of 2015, as well as from an aerial survey conducted in January and February 2016. This number is considered a minimum number of Mexican wolves known to exist in the wild in Arizona and New Mexico, as others may be present, according to USFWS. The Mexican wolf mortalities are under investigation by the USFWS's Office of Law Enforcement in an effort to determine cause of death. If available, more information will be provided in the 2015 annual report.

The aerial survey was conducted by fixed-wing aircraft and helicopter. Biologists used radio-telemetry and actual sightings of wolves to help determine the count.

The results from the aerial survey, coupled with the ground survey conducted by the IFT, confirmed:

There are a total of 21 packs, with a minimum of 47 wolves in New Mexico and 50 wolves in Arizona.

The current survey documented 10 packs that had at least one pup that survived through the end of the year.

The 2015 minimum population count includes 23 wild-born pups that survived through the end of the year.

The Mexican wolf is the rarest subspecies of gray wolf in North America. Once common throughout portions of the southwestern United States, it was all but eliminated from the wild by the 1970s. In 1977, USFWS initiated efforts to conserve the species. In 1998, Mexican wolves were released to the wild for the first time in the Blue Range Wolf Recovery Area within the Mexican Wolf Experimental Population Area.

More information on the Mexican Wolf Reintroduction Program is available at fws.gov or azgfd.gov