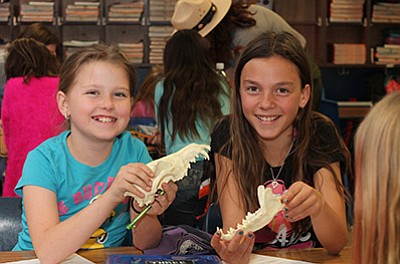 Brianna Baldosky and Riley McNelly analyze the teeth of an animal skull to determine if the animal eats meat. Loretta Yerian/WGCN

WILLIAMS, Ariz. - "Eyes in the front, born to hunt. Eyes on the side born to hide," chanted Josh Buckowiecki's fifth grade class at Williams Elementary.

The attentive class sat in groups of five as they passed around the skull of an anonymous animal. Two Grand Canyon rangers walked around pointing out details about the skulls.

"The students have to determine if the skull belongs to a predator or not," Buckowiecki said.

The rangers were in to their second day at Williams Elementary-Middle School (WEMS). They are trained environmental educators who travel throughout Arizona, southern Utah and the Las Vegas area conducting educational classroom activities and school assemblies.

"We bring in something different that maybe they haven't learned about and they can connect it to what they have been learning in school," said Kaylyn Oates an Interpretation and Resource Education Ranger at Grand Canyon. "That might inspire them to go up to the Grand Canyon to see the real thing and all these things we're talking about."

Second grade teacher Maya Caldwell organized the park rangers' visit. The rangers came to the school for three days and taught a variety of classes to the elementary and middle school students. The school had previously had experience with Willow Bend, but they lost their funding and WEMS was looking for another hands-on experience.

"We went to the Canyon for a second grade field trip earlier this year," Caldwell said. "I learned about what the park offered and found they were super flexible with classroom visits and assemblies."

All the programs the rangers offer are based on Arizona State Education Standards and are free of charge. Topics include geology, ecology, pioneer history, and archaeology. The rangers held assemblies Feb. 16 and then rotated through classrooms Feb. 17 and 18.

Kindergarten through second grade classes were taught about the five senses. Using their senses, students drew connections between the use of sense and survival in the animal world. Activities and games connected students with what it would be like to be an animal in the wild.

The rangers taught the older elementary students about pioneer history and ecology. The students learned about the people who shaped Grand Canyon's history as it became a national park. They also learned about the plants and animals that call Grand Canyon home by participating in activities that emphasize adaptations, ecological principles, and plant and animal interrelationships. Hands-on activities may include artifacts, charades, and inference-based games.

"It is experiential learning and it's inquiry base project learning by experts, which is awesome," said Carissa Morrison principal at WEMS.

"These are the things they will remember," Caldwell said. "These experiences that are completely tied in with their surroundings. The rangers were the best people to work with, so flexible and easy going. Obviously very experienced."

Some classes were given an opportunity to make their own artifacts and learn about prehistoric people of the Grand Canyon area. The students were able to unearth clues about Grand Canyon's ancient inhabitants by using artifacts, games and comparisons of past and present human activities to learn about the people who have called Grand Canyon home for the past 12,000 years.

Morrison said the experience with the rangers provided supplemental instruction that the students really enjoyed.

"It enriches the students experience anytime you can have additional outside experts who share their expertise," Morrison said. "It allow the students to gain a deeper knowledge. It makes real world connections for them."

Caldwell and Morrison were both pleased to expose the students to information in their back yard. Caldwell believes it has been several years since the students were able to interact with Grand Canyon rangers.

"It was good for the kids, it opened their eyes," she said. "You would be surprised, it's actually kind of sad how many kids have not been to the Grand Canyon yet. It's a bummer because it's literally right down the road."