Skunk problem in Williams?
Some Williams residents frustrated with over population of skunks because of health concerns and smell 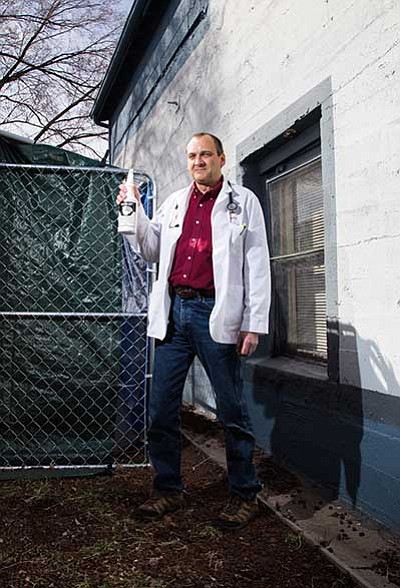 The Williams Veterinary Clinic’s Dr. Daniel Jacoby stands prepared with Skunk Off in the alley next to his clinic.Ryan Williams/WGCN

WILLIAMS, Ariz. - It was no bed of roses for the Williams Veterinary Clinic after a skunk sprayed in the alley next to their building and targeted an outdoor dog kennel Feb. 11.

The clinic had to close and cancel appointments and dealt with clean-up expenses from the attack.

"It cost us about $500 to strip down the whole outside kennel and replace tarps and rugs and deal with the dogs," said clinic owner Dr. Daniel Jacoby.

"Williams has a skunk problem," Jacoby said. "It's like you lock up at sunset and don't dare go outside until sunrise. You're imprisoned by these animals."

Jacoby said he has seen skunks walk down Route 66 in front of people and believes they are getting habituated to them.

"Every year it's getting worse," Jacoby said. "Yeah, the smell is bad, but it's the public health issue and dog and cat health issue that concerns me. It's not good for the tourist business either."

"Everyone thinks they're cute," Jacoby said. "But if it was a packrat people would be out there pelting them with bats or shooting at them."

Jacoby believes the large population of skunks can be attributed to residents feeding feral cats in town. He said skunks and cats get along well and eat the same foods.

"You'll see them feed right next to each other," Jacoby said. "Anybody who is feeding cats is feeding skunks and the population keeps going up every year. They've taken hold of this town."

"Skunks are wild animals and we live in a rural environment," Payne said. "But feeding the feral cats only attracts more skunks into town."

Payne said it is best not to feed feral cats, but if people insist she recommends that they place the food and water up high where skunks can't reach it.

"Skunks cannot climb like raccoons and cats," Payne said. "It's also best not to leave it out at night because skunks are nocturnal."

Payne said rabies can be transmitted from skunk to cat through food.

"If cats are eating with skunks and one has rabies it can be passed through the saliva," she said. "It's neurological."

Payne said Williams has many feral cats because homeowners are not spaying their pets. She encourages residents to spay or neuter their own pets and if possible trap the feral cats and bring them in to be altered.

"Cats are so independent and people just let their cats run," she said. "They don't get them fixed so there are these colonies of cats everywhere."

Jacoby said feral cats carry many diseases and parasites that can be harmful to pets and humans.

"They carry intestinal parasites such as roundworm, pin worms, hook worms, stuff like that," Jacoby said. "And kids are very susceptible to those. They also can spread leukemia and FIV to healthy cats."

Jacoby believes the population of skunks is a serious health problem for Williams residents and tourist, and their pets. He said if a dog gets bit by a skunk they need to be quarantined for 10 days.

"One of these days somebody is going to be walking around at night and either they or their kid is going to get bit," Jacoby said. "And they're going to have to go through the rabies inoculation."

Jacoby believes that relocation is not the answer to the skunk problem. He knows of several instances where the skunk just returned to the residence.

"I don't think trapping them is the answer," he said. "I think they need to be humanely destroyed until we get it under control."

Payne said there is little animal control can do about the feral cats and skunks. She said both are considered wild animals and fall under the control of the Arizona Game and Fish Department.

"People think I'm not doing my job because I don't have anything to do with cats," Payne said. "But Sierra Vista is the only town in Arizona that has a cat ordinance."

Payne said home owners need take responsibility for the feral cats and skunks. She said she has traps that she can loan to people who want to relocate an animal or have it spayed or neutered.

The Williams Veterinary Clinic and several clinics in Flagstaff offer low or no-cost spay and neutering, often less than $30. People can contact the Flagstaff Spay Neuter Clinic at (928) 527-0959 or the Coconino Humane Association at (928) 526-1026 for more information.

Payne said she has not had any felines or skunks with confirmed rabies results in Williams but she has had positive results in bats.

According to a study by the National Center for Biotechnology Information, more than 90 percent of rabies cases in the United States are in wild animals. Most reported cases of rabies occur among carnivores, including raccoons, skunks, and foxes, in addition to many bat species. Despite the elimination of canine rabies virus variants in the United States, domestic animals, including cats and dogs, are infected each year from exposures to rabid wildlife.

Flagstaff experienced notable outbreaks of rabies caused by a bat rabies virus variant in carnivore species in 2001, 2004, 2005, 2008 and 2009. The most recent epizootic involved transmission among skunk and fox populations and human exposures

Control measures were launched to halt rabies spread in skunks and limit the potential for human exposures. These efforts appeared to control rabies spread in skunk populations until 2004, when five striped skunks and one gray fox were diagnosed as rabid, and rabies was confirmed in an additional striped skunk, a gray fox and a feral cat in 2005. Rabies was not seen after this until fall 2008 when the disease was confirmed in several gray foxes and striped skunks.