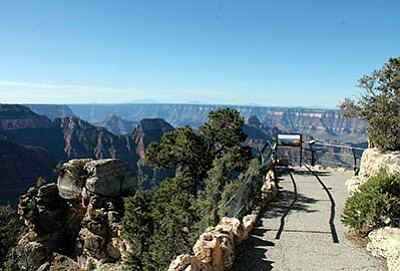 WASHINGTON -President Barack Obama's budget request for fiscal year (FY) 2017 for the National Park Service supports critical conservation, preservation, and recreation programs to share our country's most iconic, natural, cultural, and historical landscapes with the next generation of visitors.

The budget requests $3.1 billion to boost the National Park Service's essential programs and operational needs by $250.2 million above the FY 2016 enacted levels.

"This is a smart, innovative and forward-looking budget that invests in Interior's key missions - now and in the future - so we can continue to serve the American people," said Secretary of the Interior Sally Jewell. "The president's budget provides targeted investments to create economic opportunities by growing our domestic energy portfolio, building climate resilient communities, and revitalizing America's national parks as we mark their 100th anniversary."

Recently released visitation statistics show that America's national parks are more popular than ever. More than 305 million people visited the 409 parks in the National Park System in 2015, eclipsing the all-time visitation record the NPS saw in the previous year.

"Our national parks not only represent our country's most iconic, natural, cultural, and historical landscapes; they also serve as economic engines for nearby areas," Jarvis said. "Every tax dollar invested in the NPS returns more than $10 to the U.S. economy, thanks to visitor spending in gateway communities."

The FY 2017 budget builds on FY 2016 Centennial Initiative funding to address deferred maintenance of the NPS' highest priority assets. The budget includes discretionary increases of $150.5 million in operations and construction, which will help the NPS to restore and maintain all 7,186 highest priority non-transportation assets, such as visitor centers, trails and campgrounds, in good condition over the next 10 years.

Additional increases for NPS operations would support the Every Kid in a Park initiative, a program announced by Obama last year that provides fourth graders and their families' free entry to more than 2,000 federally-managed lands and waters nationwide for an entire year. The initiative is part of a broader effort to connect young people to our nation's unique outdoor spaces. Proposed funding for the initiative includes $11.5 million to transport more than one million students from Title 1 elementary schools in urban areas to nearby national parks and $8.5 million to support youth engagement coordinators at parks.

The proposed budget includes an increase of $20 million for Centennial Challenge projects and partnerships, a matching program that leverages federal funds with partner donations for signature projects and programs at national parks. In FY 2016, the NPS leveraged $15 million in federal funding from this program with nearly $33 million from more than 90 park partners, for a total benefit of almost $48 million.

The budget requests increases of $17 million for competitive historic preservation grants and $3 million for grants-in-aid to historically black colleges and universities to document, interpret, and preserve the stories and sites associated with the progress of civil rights in America. This funding builds on the $8 million provided for these activities in FY 2016.

The budget also includes several new mandatory proposals, including those tied to the National Park Service Centennial Act, introduced last September, as well as the Department of the Interior proposal to permanently authorize annual funding for LWCF programs.  The budget requests $178.2 million in discretionary funding and $141.2 million in mandatory funding for NPS programs within the Fund.

"We look forward to continuing to work with Congress as it considers additional legislation in support of the National Park Service Centennial, which would further improve the national parks by encouraging philanthropy and volunteerism, improve visitor services, and connect with a new generation of national park visitors," Jarvis said.

Other increases in the president's budget for the National Park Service support operations at new park units, as well as investments in critical natural and cultural resource management:

$3 million for climate change adaptation projects at parks, $1.2 million to provide a science-based response to energy development adjacent to parks, $1.0 million for multi-agency studies to determine the potential impact of uranium mining near Grand Canyon National Park, and $1.1 million to support expanded research and monitoring of climate change and its impacts in the Arctic.

The president's FY17 budget request of $13.4 billion for the Department of the Interior reflects his commitment to meeting federal trust responsibilities to Native Americans, conserve vital national landscapes across the nation, support the next century of the National Park Service, and allow for responsible management of energy development on public lands and offshore areas.

More information about the Budget in Brief is available at Department of the Interior..