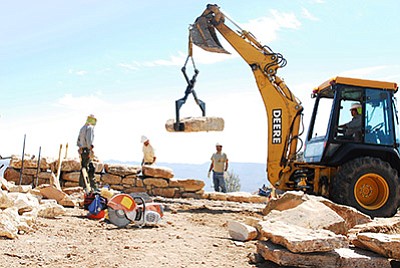 WASHINGTON - Arizona parks and monuments had more than $580 million in deferred maintenance at the end of fiscal 2015, part of a national backlog totaling $11.9 billion, according to a new National Park Service report.

The report said the backlog was up at both the state and national level - from $517 million and $11.4 billion, respectively - at a time when parks are seeing increased numbers of visitors.

"National parks are some of the most majestic, awe-inspiring, historically significant places in the world," said Theresa Pierno, president and CEO of the National Parks Conservation Association, in a statement on the report.

"Yet Congress has underfunded the National Park Service for years, forcing cutbacks in staffing, maintenance, educational programs, and other visitor services, taking a toll on these iconic and irreplaceable natural and historic resources," her statement said. "We need to give these places the attention they deserve - and the resources in the federal budget often fall short."

In Arizona, the Grand Canyon National Park alone needed an estimated $371.6 million in deferred maintenance last year for what the park service deems "necessary" work that has not been completed on time. It was one of 22 Arizona sites deemed in need of maintenance funding.

The backlogged projects range from repairing historic landmarks on park land, evaluating park buildings for energy efficiency to save taxpayers money, and ridding parks of buildings with hazardous materials, said the association.

Even though Congress approved an extra $90 million for non-transportation maintenance for 2016, many park advocates say there is a need for much more.

For the Grand Canyon, the biggest deferred maintenance bills were about $158 million for water systems, $107 million for paved roads, $33 million for trails and $18 million for maintaining buildings on the property.

Jeff Ruch, executive director of Public Employees for Environmental Responsibility, said there is concern that sewage systems, roads and other park facilities may buckle under increased traffic this year as the National Park Service celebrates its 100th anniversary.

"We are also concerned that a number of the centennial projects will add to the backlog," Ruch said, meaning some parks may build new visitor centers or trails for the anniversary that will require even more maintenance down the road.

He noted that the park service is also encouraging more park tourism with its "Find Your Park" campaign, which could add even more wear and tear as numbers of visitors rise.

Stuart McDaniel, government affairs director for the Greater Flagstaff Chamber of Commerce, said that deferred maintenance does not seem to have had a negative effect on tourism in his area.

"We've actually seen an increase in tourism to the Grand Canyon and Flagstaff in the past year," he said. "We've seen record numbers."

Pierno expressed concerns that the deferred maintenance is coming "at a time when record-breaking crowds are visiting our national parks."

"A nearly $12 billion maintenance backlog is further proof that the National Park Service does not have the funding and resources it needs to protect America's favorite places," her statement said.

Next to the Grand Canyon, the Petrified Forest National Park had the largest backlog last year in Arizona, at about $55.7 million, followed by the Glen Canyon National Recreation Area at about $45 million.

Rep. Raul Grijalva, D-Tucson, called for increased national park funding in a bill he introduced last fall to address the service's backlog and celebrate its 100th anniversary in August.

"You can't claim to love parks if you're not willing to invest in them," said Grijalva in a statement after the release of the latest report.