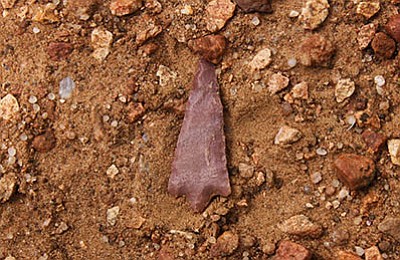 WILLIAMS, Ariz. - March is Archaeology Month, and the Kaibab National Forest has several free activities planned each week to mark the occasion.

This is the seventh year the Kaibab National Forest has organized weekly lectures and hikes during the month, according to South Kaibab Zone Archaeologist Neil Weintraub.

"Every year we report on new finds and new discoveries," Weintraub said.

Weintraub will give the first lecture March 3 called "Photospheres and Tiny Planets: Digitally Capturing Northern Arizona Archaeological Landscapes." He will discuss new methods that Kaibab archaeologists are using to document and interpret archaeological sites across the forest.

The next lecture, which takes place March 10, is about the 2015 Kaibab National Forest Heritage Accomplishment Report. Weintraub will discuss the projects that Kaibab archaeologists completed in 2015 and discuss any new discoveries.

The final lecture, which takes place March 24, features Weintraub and Hangan together speaking about "The Rock Fire: Using Fire as a Tool to Help Protect and Preserve Historic Native American Sites." They will discuss how Kaibab fire staff managed the 2015 Rock Fire to reduce the threat of wildfire in an area with numerous significant historic Native American sites. They will also show the video "Keeping Fire on the Ground: Resource Specialist Perspectives on the Kaibab National Forest."

Weintraub encouraged hikers to bring boots and warm clothing, since the 1.5-mile roundtrip hike will take place regardless of weather conditions. Weintraub said he expects the waterfall will be flowing during the hikes since the region has received so much winter precipitation.

"Be prepared to get wet as a waterfall often cascades off the lava flow requiring crossings in ankle deep water to access the petroglyphs," Weintraub said.