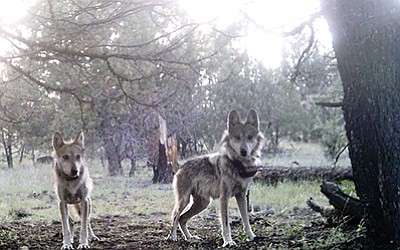 PHOENIX - Two Mexican wolves died during the annual population count and capture operation this year. Both will undergo necropsies at the U.S. Fish and Wildlife Service's Forensics Laboratory in Ashland, Oregon, to determine causes of death for each wolf.

The Interagency Field Team (IFT) temporarily suspended capture operations to conduct a review of events leading to the captures and deaths. The techniques, protocol and drugs used were the same as those used throughout this year's count and last year's count. The wolves, F1295 and F1340 were captured in late January.

Prior to these two deaths, no wolves have died during past annual count and capture operations, which have been occurring since 2005 - successfully capturing and releasing 110 wolves to date.

The handling and processing of the two wolves were led by personnel permitted by the Fish and Wildlife Service. These individuals received up-to-date training in drug immobilization and wolf handling. All personnel in the helicopter during the count and capture operations are current in training in helicopter safety and aerial capture techniques. A veterinarian was involved in the processing of both wolves.

U.S. Fish and Wildlife Service's Mexican Wolf Recovery Coordinator, Sherry Barrett, has been leading the program for five years and says the IFT manages the wolves in the wild.

"This team of biologists is dedicated to the recovery of these wolves and the last thing they want is to have a wolf die during these operations," she said.

The annual population count and capture operation is conducted every winter to determine the minimum number of Mexican wolves in the Mexican Wolf Experimental Population Area. The wolves are counted by air via an airplane and helicopter. The captures are made with a tranquilizer dart from the helicopter. The capture operations are conducted to attach radio collars, which enable the IFT to gather biological information, such as dispersal, territories, habitat use and breeding. The radio collars also enable the IFT to manage the wolves to address any conflicts with human activities, such as livestock depredations. While immobilized, the IFT also obtains blood from each wolf for DNA analysis and to screen for disease, determines body condition and give vaccinations.

Barrett says the protocols can be amended based on impending necropsies.

"We understand the risks when conducting aerial capture operations, and our team takes extraordinary measures to reduce those risks. We continually conduct pre-operation and post-operation reviews to continue to improve our methods and procedures," she said