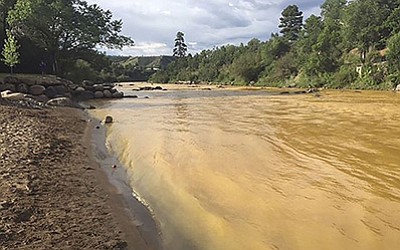 The Animas River, days after an Aug. 5 spill of toxin tainted wastewater from the abandoned Gold King Mine in Colorado. The spill has since been cleaned up but regulators - and nearby residents - are keeping a wary eye on it. Photo/Colorado Parks and Wildlife Department via Rueters

WASHINGTON - Six months after the Gold King Mine spill dumped nearly 3 million gallons of toxins into the Animas River, regulators say the immediate threat has passed and that an abandoned mine survey has "not discovered anything similar" in Arizona.

But environmental and tribal leaders near the spill say the long-term threat remains.

"The contaminants are settled into the soil and in the banks, but the EPA says the water is back to normal," Navajo Nation President Russell Begaye said.

"What happens when there's a storm or when the snow melts? There's no assurance that when the water is at a high level the contaminants won't flow downriver into farmlands," Begaye said.

The Navajo declared a state of emergency, along with the states of Colorado and New Mexico, after a cleanup crew working for the Environmental Protection Agency accidentally opened a tunnel at the abandoned mine in Silverton, Colorado, on Aug. 5.

The accident released a flood of wastewater that had collected in the tunnel, sending a toxic plume of zinc, lead, iron and arsenic into the Animas, which is part of the Colorado River basin.

The Navajo were directly affected because the Animas runs into the San Juan River, which runs through 215 miles of tribal lands and is a major agricultural resource. The spill also threatened the region's drinking water, on and off the reservation.

Arizona environmental officials monitored water quality but said at the time that they did not expect the toxins would have a major impact on the state's waters, hundreds of miles downstream.

"The event was never an emergency crisis for Arizona," said Trevor Baggiore, director of the Arizona Department of Environmental Quality's Water Quality Division. "We never saw a significant spike in contamination levels, and plan to continue monitoring as we have been."

In the wake of the spill, ADEQ began surveying the state's 25,000 known abandoned mines to locate any hardrock mines, evaluate them and then rank them by potential risk. It's still early, but Baggiore said the abandoned mines have been located and the department is currently in the process of classifying them.

Jayson Barangan of the Bureau of Land Management's Arizona office said his agency is also monitoring mines as a part of the Abandoned Mine Lands program, which he says oversees about 7,000 sites in the state.

"We have not discovered anything similar to the Gold King Mine site," Barangan said this week. "Most of the state's abandoned mines are located in sites that have very low precipitation or deep groundwater."

In a Jan. 15 update on its response, the EPA said it had provided water for the Navajo, their livestock and farms after the spill, and that more "may be provided as determined appropriate by EPA." The plan says the remaining clean up and repairs from the spill will cost around $20 million and continue through November.

But Begaye expressed frustration with the EPA, saying the agency was "not forthright" - something he finds particularly troublesome in light of the response to reports of the lead-tainted water supply in Flint, Michigan.

"The amount of attention being given to Flint by the EPA - in comparison to what's happening to us - it's a world of difference," Begaye said. "The EPA is sending resources to Michigan and almost none to the Navajo Nation."

Sandy Bahr, the director of the Grand Canyon chapter of the Sierra Club, said that while water quality in the state has improved since the spill, there is still more work to be done to keep another Gold King Mine from happening.

"The EPA is much more engaged now," Bahr said. "But what hasn't changed is that we're still not requiring more regulations on abandoned mines or funding cleanup actions for those mines."

While the EPA has approved water from the San Juan River as safe for irrigation and agricultural purposes, Begaye said the Navajo are taking a cautious approach as they prepare for the regular May opening of their irrigation system.

He pointed to a recent test by New Mexico's environmental agency after a heavy monsoon that showed levels of contamination that came close to those immediately after the spill. He said snow melt and heavy rainfall could stir up sediment, and that the Navajo will continue to run their own tests before using the San Juan River again for irrigation.

In the meantime, he said, tribal staff are working on agreements to present to Congress and the EPA regarding compensation for the costs the nation incurred from the spill.

"Whether they like it or not, it's their responsibility," Begaye said. "They claimed responsibility for the spill in the Senate hearings, and none of those promises they made have been kept."