Northern Arizona astronomy: Jupiter, its moons and why they have been important 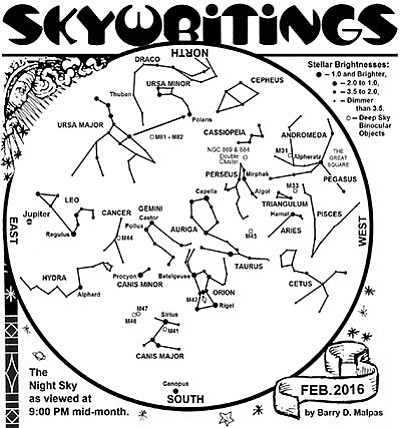 It has been very interesting to observe the planets over the past couple months, as long as you do not mind viewing them in the early morning sky. Just before sunrise, Mercury, Venus, Saturn, Mars and Jupiter can be seen across the celestial dome in a line spanning from east to west. However, as most people prefer to view in the evening the skies have been barren of planets until this month when Jupiter, the largest planet in the solar system, and the second brightest of the planets, makes its appearance rising in the east around 9 p.m.

Although Jupiter has been seen visually in the skies since antiquity, it was only observed through a telescope just more than four centuries ago, in 1610 by Galileo Galilei (1564-1642). When Galileo viewed Jupiter he noticed that there were four small stars that appeared to be moving near the planet. Over a period of two years he realized that these objects actually orbited Jupiter, and that they were in fact moons of the planet.

This is one of several celestial observations that Galileo, along with several other astronomers, noted that provided proof that the Earth was not the center of everything celestial, i.e. the Geocentric Model of the Universe was invalid, and pushed scientists to finally adopt the Heliocentric (sun centered) Model of the solar system. Being a Catholic, this also got Galileo in a lot of trouble with Pope Urban VIII, because the church promoted the old Ptolemaic Geocentric Model. This resulted in Galileo's house arrest in 1633, for the rest of his life, for vehement suspicion of heresy. Of course house arrest was a fairly lenient punishment, since only 33 years prior, Giordano Bruno, a Dominican friar, mathematician and astronomer, had been burned at the stake for his cosmological theories and support of the Copernican Heliocentric Model. It wasn't until 1992 that Pope John-Paul II exonerated Galileo of heresy.

The Speed of Light

Galileo scientifically studied many things during his life. One was to try to measure the speed of light. His experiment involved having two observers with lanterns on two hilltops a mile apart. When the first observer opened his lamp, the second observer, seeing the light from the first, would then open his lamp. The first observer would then record the time difference between his first lamp opening, and seeing the light from the second observer. Unfortunately, because of the small distances involved, as well as the slow reaction times of the observers, provided inconclusive results. All he could deduce was that if the speed of light was not instantaneous, it was extremely fast.

The Danish astronomer Ole Christensen Rømer (1644 - 1710) was the first person to make accurate measurements of the speed of light which he announced in 1676. Using the four Galilean moons of Jupiter (Io, Europa, Ganymede, and Callisto, though mostly, Io) he observed over eight years that when the orbital periods of the Jovian moons were observed farther from Earth, predicted eclipse times, made from when Jupiter was closer to Earth, lagged by up to 22 minutes. However, when Earth in its orbit came closer again, the predictions were correct. His conclusion was that it took the light from Jupiter a certain time to span the extra distance as Earth moved around in its orbit. His calculations resulted in a speed of 141,000 miles/second. This is about 76 percent of the known velocity. However, to Rømer's credit, the orbital sizes of the Earth and Jupiter at the time were not that well known and were also off by about the same percent. So, using his timings with the correct distances, he would have been in error by no more than 1 percent.

The determination of longitude (east-west position) has always been a significant practical problem in navigation. To determine longitude one needs to know the precise local time as well as the reference time at Greenwich, England. Galileo had proposed a method of establishing the time of day, and thus longitude, based on the times of the eclipses of the jovian moons by Jupiter, in essence using Jupiter and its four large moons as a celestial clock. However, the method proved impractical, because of the inaccuracies of Galileo's eclipse timetables and, specifically, the difficulty of observing the events from the deck of a rocking ship. It was not until accurate mechanical clocks were developed in the eighteenth century that a method was made that worked accurately. Even Zebulon Pike, in 1806, while going west to chart Jefferson's Louisiana Purchase, took Jupiter eclipse time tables and a telescope with him in order to determine his longitude during the expedition.

Occasionally, even amateur astronomers can make significant contributions. In the mid-1970s, a computer programmer named Charles Kapral (1944 - 2008) decided to perform Rømer's experiment to measure the speed of light. When he measured the eclipse ingress times and matched them to those in the American Ephemeris and Nautical Almanac, everything went well. However, his eclipse egress times never matched up with the Almanac's predictions. After many attempts to find out what he had been doing wrong he contacted the Naval Observatory. After some checking, they discovered that during the transferring of programs from the old computers to the new ones a few years prior, part of the egress equations had been left off. The Naval Observatory had been publishing the incorrect data for several years and Charlie with his Rømer's Speed of Light project discovered the error.