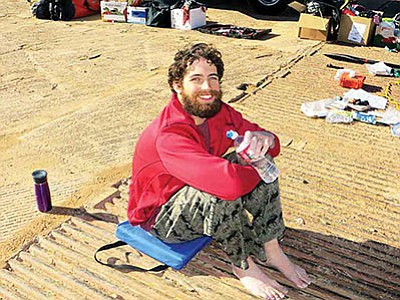 Ben Orkin hydrates at the Pearce Ferry take out after setting a new speed record through the Grand Canyon. Photo/Pam Wolfson

For the last two years, the 25-year-old accountant has been planning a speed run through Grand Canyon. An attempt by Orkin last year set a record for a kayak, but did not break the overall speed record.

Amazingly, the Grand Canyon speed record was broken the week before by Matt Klema. Orkin was unaware of this when he launched from Lee's Ferry Jan. 23.

On Jan. 20, the speed record of 35 hours and 43 minutes was shattered when Matt Klema who finished the run in 35 hours and 5 minutes. Orkin broke Klema's record by just over one hour.

Unfortunately, Orkin lost his global positioning system tracking device overboard at river mile 271. At that point he was 33 hours and ten minutes into the journey, and six miles from completion. According to Orkin, once he reached river mile 277, he slowed way down and floated most of the last three miles to the take-out at Pearce Ferry, where he arrived at 1p.m. local time, having traveled the 280 miles in 35 hours.

Luckily, Orkin carried a backup GPS, and his time for the 277 mile cruise through Grand Canyon was an astonishing 34 hours and two minutes.

Orkin needed to be helped out of his kayak at Pearce Ferry, being unable to stand after sitting upright in his kayak for a day and a half.

For the entire 277 miles, Orkin almost doubled his kayak speed over the river speed running rapids in the moonlight, including Lava Falls.

According to Orkin, he had to exit out of his boat in Lava Falls and lost almost an hour of time there.

The majority of the time Orkin was racing through Grand Canyon was done in moonlight. Sunrise at the South Rim was at 7:35 a.m. and sunset was 5:47 p.m. This amounts to just a little over 10 hours of sunlight. In a mile deep canyon, actual sunlight is much less.

Some figures for speedy river trips through Grand Canyon include the following:

One man in a kayak late in the 1970's (the exact dates and flow are unknown) cruised through in 49 hours.

Three men in a motorized sport boat made the cruise in 1993 in 35 hours and 43 minutes.

Each one of the records above can be seen as a standalone achievement, but for shear speed, Ben Orkin's is now the time to beat. A number of river trips are planned later in the spring to attempt to do just that.

In the meantime, Congratulations go to Ben Orkin for accomplishing this amazing journey!