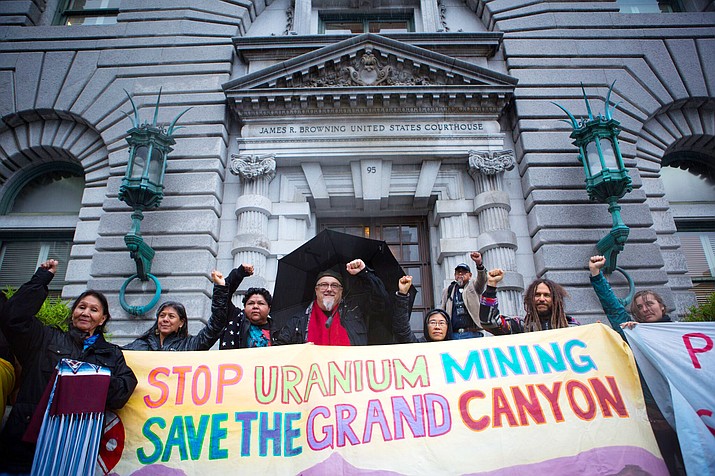 Havasupai tribe members and supporters stand outside the the Ninth Circuit Court of Appeals in San Francisco, California Dec. 15.

This map shows sites of active mines, proposed mines and mining claims in and around the Grand Canyon.

GRAND CANYON, Ariz. — In 2011, the United Nations Human Rights Council passed a resolution mandating safe water a fundamental human right. In the United States, the world’s richest country, less than one percent of non-indigenous households lack access to clean, safe water (0.6 percent), according to the report made by the UN’s independent expert.

That number skyrockets to 13 percent among Native American households.

It is in part this disparity that compelled the Havasupai Tribe to file two lawsuits in federal court aimed at protecting their water supply from the contamination resulting from uranium mining near the Grand Canyon.

The small tribe has made its home at the bottom of the Grand Canyon for around 800 years, and its livelihood depends on the seeps and springs that keep Havasu Creek flowing. Not only does the creek provide a water source for the tribe, it also creates the striking turquoise waterfalls that Havasu Canyon is known for. Tourism and camping at the site sustains the tribe’s economy.

“We are the Havsuw ‘Baaja, which means people of the blue-green water,” said Don Watahomigie, chairman of the Havasupai Tribe. “Our very being and continuance as Havasupai depends on the continued flow of our water and our ability to continue that reliance forever.”

According to the Havasupai people, the meadow where one of the mines in question is located, is known as Mit taav Tiivjuudva; it is a sacred place used by the tribe for pilgrimages, ceremonies, gathering of medicinal plants and prayer. Red Butte, towering above the forest, is known as Wiigdwiisa, home of the Grandmother, the First Woman; this is where her many children come to seek wisdom and renewal. In one of the initial court filings, Rex Tilousi, a religious and cultural leader of the tribe, explained the significance of the deeply-sacred area.

“The meadow is where the Grandmother and her Grandson meet every year to renew life for all Havasupai … we hold our babies up to face Mit taav Tiivjuudva and meet the Grandmother,” he said.

The issue of uranium mining around the Grand Canyon is hotly-contested.

In 2010, the U.S. Geological Survey (USGS) reported 15 springs and five wells near the Grand Canyon have concentrations of uranium that exceed the Environmental Protection Agency’s (EPA) standards for safe drinking water. The USGS also found radioactive dust several hundred feet from the North Kanab Mine site that registered 10 times the acceptable background levels for uranium.

In part, these findings led to the U.S. Interior Department’s 2012 withdrawal of approximately one million acres of public lands from new uranium mining claims for 20 years.

But what about already established mining claims?

According to the Grand Canyon Trust, the largest public and environmental threat comes from “zombie” mines — mines that once produced ore but are now considered non-operational. Three mines near the North Rim and one near the South Rim, some of which have sat idle for two decades, are exempt from regulation by federal agencies. As such, they were permitted to recommence operations at any time without updates to Plans of Operations and with no new assessments of environmental impact.

“When the bottom dropped out of the uranium market in 1991, the owners of these mines locked up the gates and walked away, hoping for a better day,” said Roger Clark, the Trust’s Grand Canyon program director.

“When the uranium market surged again in 2007, the company that bought out these mines wanted to come back and reopen them, and the Forest Service basically said ‘Ok, you’re good to go, we don’t need any new environmental impact statements or updated operation plans.’ We’re talking about mines that have been dormant for twenty years.”

Clark noted when operations stopped at one of the sites in question, Canyon Uranium Mine, in 1992, contamination wasn’t a big concern; only around 50 feet of the planned 1,450-foot main shaft had been completed.

Since completing the mine shaft, however, the issue of radioactive pollution has come to the forefront. When ore containing uranium is exposed to the air, it oxidizes, making it highly soluble in water, he explained.

Sump pumps are used to pump water out of the mines and into holding ponds, but when the mines are shuttered, the pumps are turned off, and water accumulates from the bottom up. That leaves contaminated water free to find its way into the groundwater supply that feeds streams, springs, seeps and wells in the area — water sources that sustain the Havasupai Reservation.

In 2013, the Havasupai Tribe, along with Grand Canyon Trust, Center for Biological Diversity and Sierra Club, filed a lawsuit, Havasupai Tribe v. U.S Forest Service, to prevent the resumption of uranium mining at Canyon Mine, about six miles southeast of Tusayan.

“Canyon Uranium Mine is situated in the midst of what is undoubtedly the most sacred site in the landscape of the Havasupai people,” said Richard Hughes, counsel for the Tribe, in his opening argument.

The Canyon Mine was approved by the Forest Service in 1986, with Canada-based Energy Fuels, Inc., planning to extract uranium as early as the early 1990. Mining operations were halted at the site in 1992 because of the fall in uranium prices. Last year, the company resumed construction on the mine shaft.

In June 2012, the Kaibab National Forest completed a review of documents and operation plans related to the Canyon Mine and determined “no modification or amendment to the existing Plan of Operations was necessary; that no correction, supplementation, or revision to the environmental document was required; and that operations at Canyon Mine could continue as a result of no further federal authorization being required.”

It was this determination that brought forth the lawsuit by the Havasupai Tribe: the plaintiffs contend that the U.S. Forest Service failed to consult with the tribe regarding the mitigation of environmental impacts on sites of major cultural significance – the U.S. Department of the Interior granted Traditional Cultural Property status to the Red Butte area in 2010.

“The question in this case is whether the U.S. Forest Service violated a section of the National Historic Preservation Act in making the determination that EFR could recommence the development of Canyon Mine after a 20-year hiatus in activity without conducting any bona fide consultation … to develop a memorandum of agreement on measures to avoid, minimize or mitigate what would certainly be serious adverse impacts of Red Butte and the meadow,” Hughes said.

The tribe contends that the Forest Service granted permission for Energy Fuels, Inc. to resume mining operations without consideration of new developments and technology, violating its legal obligations under the National Historic Preservation Act to consult with the tribe concerning the irreparable harm the mine will have on the sacred site and implementing measures to prevent damage.

A 2014 ruling by an Arizona District Court found in favor of the Forest Service. The Havasupai Tribe has appealed that ruling with Havasupai v. Provencio.

According to Hughes, the Ninth Circuit Court of Appeals can take anywhere from six months to one year to render a verdict. After the three-judge panel issues a ruling, he said, it’s likely the end of the road. The only court that can overturn the appellate court’s ruling is the U.S. Supreme Court.

The ban on new uranium mining claims around the Grand Canyon was first requested in 2008 by Arizona’s then-governor Janet Napolitano, along with local governments, Native American tribes (including the Havasupai) and conservation groups; Rep. Raul Grijalva (D-AZ 3rd District) also to the Committee on Natural Resources a resolution enacting emergency protections on the areas in question. The committee passed the resolution by a vote of 20-2, requiring the interior secretary to immediately withdraw the one million acres for three years.

In 2011, the Obama Administration announced plans for a mineral withdrawal (mining ban) on those one million acres around the Grand Canyon. Interior Secretary Ken Salazar finalized the ban in January 2012.

The National Mining Association (NMA) filed suit challenging the enactment of the ban, but the withdrawal was upheld in two separate instances in 2013 and 2014.

The NMA appealed the lower court’s decision to uphold the ban.