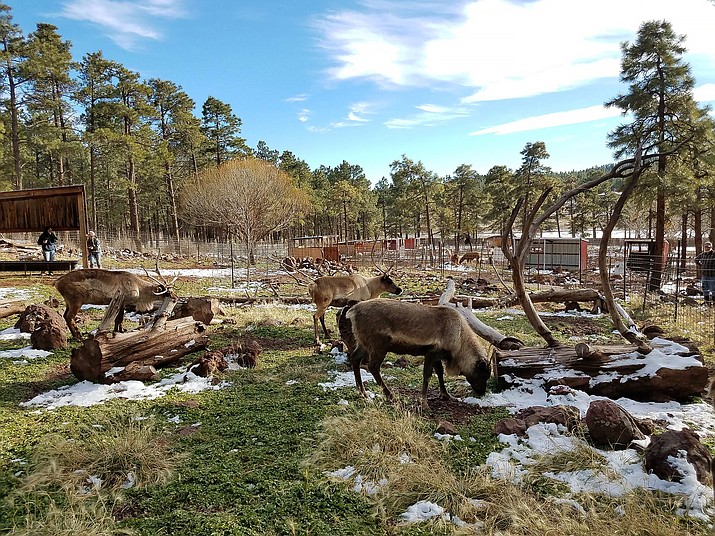 Blitzen meets Vixen and Cupid for the first time at his new home at the Grand Canyon Deer Farm and Petting Zoo.

The familiar poem by Clement Clarke Moore, which forever immortalized Santa’s reindeer and the familiar call from Santa’s lips in the poem “The Night Before Christmas” has been echoed on children’s lips since 1822. Santa urges his reindeer to fly into the chilly December air to deliver Christmas presents to children around the world. But what do Dasher and Dancer and Comet and all the rest of Santa’s reindeer do the other 364 days of the year?

Dasher and Blitzen explore their new home at the Grand Canyon Deer Farm and Petting Zoo. The reindeer arrived at the farm in October.

In October, the Grand Canyon Deer Farm and Petting Zoo, outside Williams, opened its doors to several new additions — Dasher and Blitzen, two reindeer bulls. Both eight-month-olds, Dasher and Blitzen arrived at their new home ready to make new friends and see new faces. They are joining their good friends, Vixen and Cupid at the farm.

Deer Farm owners Randy and Patricia George said they were excited to welcome the new reindeer and said Dancer and Blitzen are the first reindeer to arrive at the farm since 2003.

“We got them in October and they are eight months old now, born in mid to late April. We are very, very excited to have them here,” Patricia George said.

Having reindeer at the farm has been a tradition since the George’s brought the first reindeer to the farm in 1992. They have had up to 15 reindeer at one time and in the past would even take the reindeer out for public appearances and walk with them in parades. Before Dasher and Blitzen arrived, the farm only had two reindeer — 17-year-old Vixen and her daughter, Cupid.

Having had reindeer at the farm for almost 25 years, the George’s have learned how to care for their health and said they pay special attention to them before Santa’s big night.

According to George, in the wild, reindeer can live up to eight years and in captivity will typically live around 15 years.

George said reindeer are the only deer species in which both the males and females grow antlers and said calves will grow antlers in their first year.

“By mid-December the bulls shed their antlers so Santa uses females to drive the sleigh,” she said. “Only the girls have antlers and they don’t shed until anywhere from February to May depending on if they’re pregnant.”

She said the reason male reindeer lose their antlers in the winter is so the girls, who are most likely going to have babies in the spring, will have dominance over the feed source.

“They run the boys off —they’re in charge,” she said. “The girls will keep their antler until March or April.”

George said the cows conceive their young on different dates but will have them around the same time in order to help keep them safe from predators.

At eight months old, Dasher and Blitzen are not considered fully mature bulls yet.

“By next year they are going to be half again the size they are,” George said.

According to George, during the months and weeks leading up to Christmas, visitors are especially excited to make their way to the farm to visit the reindeer. Often, visitors riding the Polar Express stop by before or after their train ride to see the reindeer as well as the multitude of other animals that can be found at the farm.

The George’s bought the Deer Farm in 1987 and will celebrate 30 years as a family owned business in March 2017.

“We’ve been coming here since 1972, on a date, 1973 on our honeymoon, and continued coming on a regular basis after that,” George said. “We loved the farm, and found out by accident, that it was for sale.”

The George’s said when they bought the farm they were looking for a way to make a living outside of Phoenix and called about an ad for a small RV park in the area. Instead they found out the farm was for sale and bought it.

“The best part of operating the farm is all the wonderful people we’ve met over the years, many became friends,” George said. “Watching the children interact with the animals is so awesome, and people who have a passion for animals are incredible people.”

In addition to reindeer, the farm has mule deer, African porcupines, a Sika buck, a Zonkey, Patagonia cavies, miniature horses, wallabies, Indian zebu, fallow deer, bison, alpacas, a camel, codemundis and many other animals to visit and pet.

In 1822 Clement Clarke Moore wrote “The Night Before Christmas,” for his six children. It was published anonymously the next year, and to this day the plump, jolly Santa described therein rides a sleigh driven by eight familiar reindeer:

This poem helps determine the first written accounts of reindeer in conjunction with Santa, but how did reindeer come to be associated with Santa Claus in the first place?

Many popular Christmas traditions related to Santa Claus were brought to America by Dutch and German immigrants. As the persona of Santa Claus and celebration of Christmas were being developed in the west, customs and myths from foreign lands, including those of Scandinavian and European countries, were incorporated. 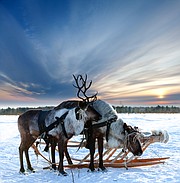 Some historians believe the stories of Thor soaring the skies in his sleigh pulled by two large, horned goats may have influenced the creation of Santa’s sleigh and flying, antlered reindeer by those in the west familiar with Dutch or Germanic mythology.

Reindeer were once viewed as mysterious creatures linked to lands in the northern part of the world. Their population was widespread in Scandinavian and Eastern European countries where they often were used in transportation, pulling sleds and sleighs.

Lapland is the northernmost cultural region of Europe, largely within the Arctic Circle, traditionally inhabited by native Sami people.

The Sami culture in Lapland is intimately connected to the reindeer, similar to that of the Native Americans and the buffalo; the animals have long served to meet many needs of the Sami, from food to clothing to, of course, transportation.

The Sami utilize reindeer as a resource in a sustainable manner. The Sami people manage the reindeer to maintain a healthy population.

Some reindeer are also selected to pull sleds. Though it is a dying practice, reindeer sleighs used to be a primary mode of transportation for the Sami people.