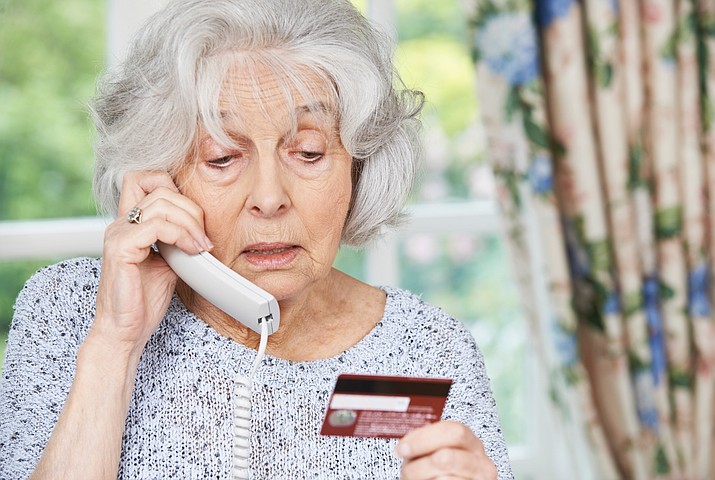 A woman gives her credit card information over the phone.

WILLIAMS, Ariz. — The Coconino County Sheriff’s Office (CCSO) has received multiple reports of fraudulent schemes over the past 24 to 48 hours and advises residents be alert.

The CCSO wants residents to be aware the scammers are using fear and bullying tactics to coerce victims.

One of the schemes reported is of an individual representing himself as a law enforcement or court official. In some cases the person has used the names of legitimate law enforcement officials and in other cases a fictitious name. The caller claims that either the victim or a member of the victim’s family has either failed to appear for jury duty or other court matters, failed to pay a fine, or has a warrant. The fraudulent schemer demands that money be paid immediately through pre-paid credit cards or money wire transfers, or else the person will be arrested. In some of the cases, the caller advises the person to stay on the phone, and if they disconnect the phone call or fail to do as instructed, he will immediately send deputies to their home to arrest them.

In another fraudulent scheme, victims are contacting law enforcement advising they have found vehicles for sale via the internet at fictitious businesses in and around northern Arizona. These fictitious businesses often have what appear to be legitimate websites. Victims have sent money for full or partial payment of vehicles only to find the business and or vehicle do not exist as advertised. The most recent listed a county maintenance yard and previously an auto salvage yard as the dealership address.

The third scheme we have received reports of recently is from people who have been using dating websites. They are contacted by someone who at first seems to be legitimate and of appropriate age. Later the person begins sending sexual photos and engaging in sexual conversation only to later claim to be underage. The victim is contacted by someone misrepresenting themselves as law enforcement (either a legitimate or fictitious name) or the under aged person’s parent demanding money to avoid prosecution.

Scammers are constantly coming up with new tactics. Fraudulent schemers may use a variety of ways to con victims — including landline phones, cells phones, emails, text messages, social media websites, and fake websites. Sometimes the scam is to steal money from the victim, other times the scammer may be trying to steal personal information from the victim to use in further fraudulent schemes. Scammers may have some of your personal information already in from the large amount of information readily available on the internet. They also are able to spoof phone numbers, email addresses, and social media links. These tactics make the phone call, text, or email appear valid.

If you suspect you have been the victim of a fraudulent scheme or scam, please contact the Coconino County Sheriff’s Office at (928) 774-4523.