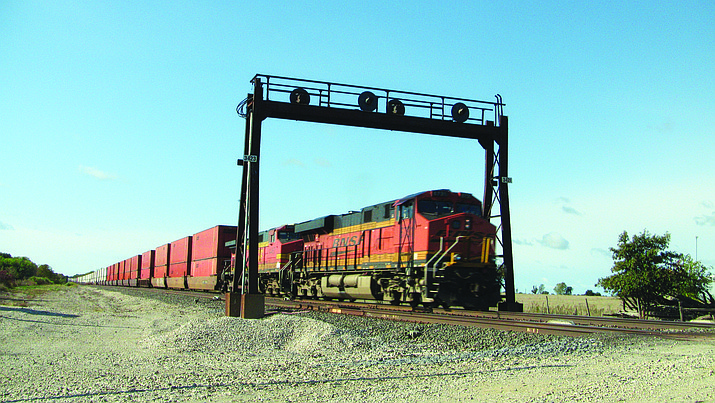 The Arizona State Railroad Museum is donating a vintage searchlight signal bridge similar to this bridge to the city of Williams.

A 1920s searchlight signal bridge will be placed on the west end of town and fitted to bridge Route 66, similar to the structures on North Grand Canyon Boulevard. The structure was previously used by the Santa Fe and BNSF railroads and donated to the museum.

“They are 44 feet wide, so we will put extensions on, it,” ASRM Founder Al Richmond said. “It needs to be a little over 50 feet.”

Richmond said crews will pour the foundations and place an archway above the signal similar to the other structures found on North Grand Canyon Boulevard and East Route 66.

Richmond said a vintage U.S. Army tank car will also be placed in town. The tank car was being stored in Bellemont and is being transported to Williams. It will be painted, restored and placed on the southeast corner of Grand Canyon Boulevard.

“We have two of these, so it will be nice to get this up and give the town another piece of railroad history,” Richmond said.

The project is funded by ARSM foundation money with work to be completed by city of Williams work crews.

Richmond said the installation of the signal structure should only take a day once the remodel is complete and he hopes to have the project completed by early spring 2017.